After Win Over Iona, Masiello Says MAAC Is Not a One-Bid League | Zagsblog
Follow @adamzagoria

After Win Over Iona, Masiello Says MAAC Is Not a One-Bid League 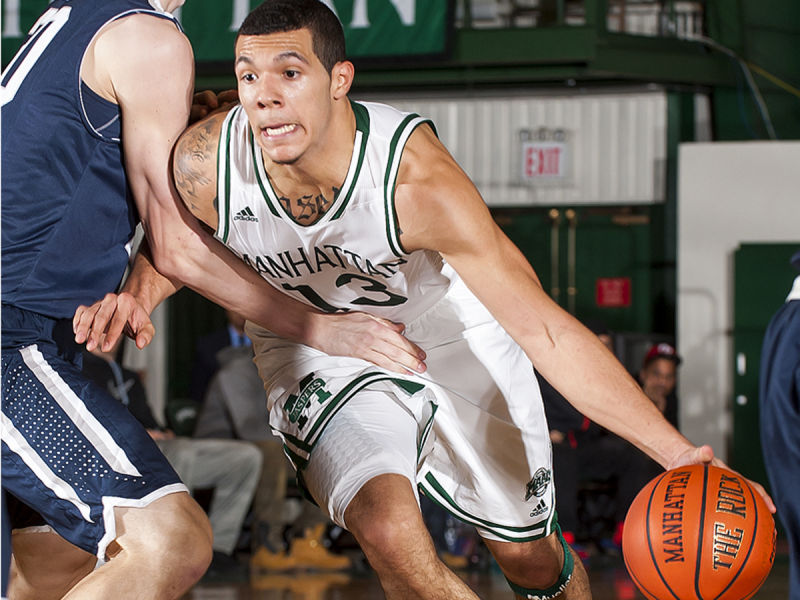 By JADEN DALY Special to ZAGSBLOG NEW YORK — Who says the MAAC is a one-bid league? Manhattan coach Steve Masiello isn’t buying it. “For people to say ‘Well, it’s a one-bid league,’ why is it a one-bid league?” Masiello asked after his Jaspers beat regular-season conference champion Iona, 80-77 in overtime, in front of a sellout crowd at Draddy Gymnasium. “You mean to tell me Iona, Manhattan, Quinnipiac and Canisius aren’t going to give a 5 seed or a 4 seed a heck of a night? These four teams, if you put them in a 13/4 game, that 4 team’s in trouble. You put them in a 5/12, I’m not saying we’ll win, but you’ll hear, ‘Oh my God, we drew Iona? We drew Quinnipiac?’ That’s not who you want to play.” Manhattan was mathematically eliminated from MAAC regular-season championship contention, but the Jaspers took a big step toward solidifying their chances of winning the postseason crown with the win. Emmy Andujar continued his dominance of Tim Cluess‘ Gaels with a career-high 28 points. As a freshman two years ago, he hit a buzzer-beating 3-pointer to complete an 18-point comeback. With the win, Manhattan moves to 21-7 on the year and 14-5 in the MAAC, while Iona drops to 19-9 and 16-3 in conference play after having locked up the top seed in next week’s MAAC tournament in Springfield, Mass. Iona still has a realistic shot to represent the MAAC in what would be their third straight NCAA Tournament, but with a 3-6 nonconference record and lack of a true signature win, the Gaels would likely have to cut down the nets at the MassMutual Center in order to make the field of 68. Only twice in MAAC history has the league sent two teams to the Big Dance. Regardless, Masiello refused to accept the notion that the MAAC, long stereotyped due to its mid-major standing, could not get a second team in. “This isn’t a one-bid league this year,” he reiterated. “Look at these teams. Canisius has Notre Dame beat, (and) goes down to the wire at their place. I mean, who are you going to put in, a seventh-place team in a BCS conference is better than these three. I don’t buy it. I just don’t buy it.”
Follow Jaden on Twitter