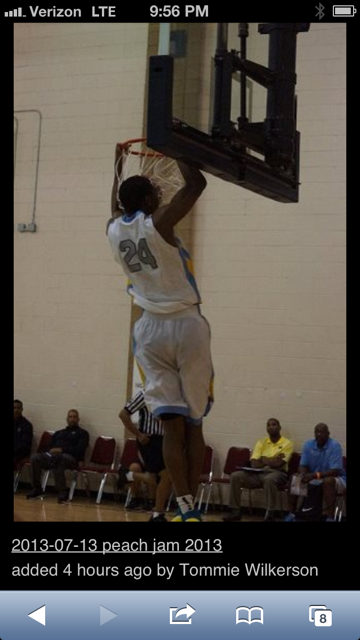 One of the elite players in the Class of 2016, Tyus Battle is planning upcoming visits to both Syracuse and Ohio State, his father told SNY.tv. Gary Battle said they are planning on going to the Duke-Syracuse game Feb. 1 and the Michigan State-Ohio State game March 9. Syracuse and Ohio State are near the top of a group of schools in the mix for the 6-foot-5 Battle, who went for 22 points, 12 rebounds, five assists and four steals Thursday when Gill St. Bernard’s beat Hunterdon Central, 67-53. That group also includes Indiana, Villanova, Michigan, UConn and SMU. “Syracuse, he’s top priority for Syracuse,” Gary Battle said. “They want him to come in and play the point. “In their system he definitely can fit that role. He likes to pass the ball. He’s 6-5, can handle. I see him as a kind of a combo point. He definitely has to have the ball in his hands. He’s not a straight wing. He’s a muti-faceted guard.” Gary will definitely go to the Syracuse game and assuming Tyus doesn’t play Feb. 1, he will also attend. Right now, Gill St. Bernard’s is slated to play St. Peter’s Prep on Jan. 31, but the game could be moved to Feb. 1. Gary called the Duke-Syracuse game — one day before the Super Bowl — a must-see for him. “That would be a Super Bowl for us to see Duke play at Syracuse in front of 35,000 people,” he joked. “I’ll take that over the Super Bowl as a basketball fan.” The Ohio State visit is also set for March 9. “Ohio State’s really working hard,” Gary said. “We’re definitely going to get out to Ohio State this year because we haven’t been there. We haven’t seen a game at Ohio State so we’re gonna go.”
Asked what he likes about Ohio State, Gary said: “Thad Matta he just wins. What does he have, five Big Ten titles in 11 years? We love how they played Evan Turner. We see Tyus in that same kind of mode, so they’ve had some experience with guys like that.”
As for Indiana, Gary said they’ve been “in the mix since he became a freshman” and praised coach Tom Crean for developing players. Gary also compared his son to former Indiana star Victor Oladipo. “They play really fast,” he said of Indiana. “They have multiple guards who can do a lot, dribble, pass, even post up. Crean does a phenomenal job of developing guys. I think he does an incredible job.” UConn is new in the mix, and Gary said they plan to get to a game there. “UConn has really picked it up quite a bit,” Gary said. “Coach [Kevin] Ollie has done a great job with him and showing that he’s a top priority in 2016.” Meantime, Villanova assistant Ashley Howard was at Battle’s game Thursday, one game after he went for 32 points. “I love Villanova, I love Jay [Wright],” Gary Battle said. “I’ve built a relationship with him over the last couple of years being a coach on the AAU circuit with Team Final. He recruited a couple of our guys.” He added: “Nova’s a great academic school and has a good business school and basketball-wise they’re having a tremendous year. Tyus is a multi-faceted basketball player as a guard so Villanova would be a good fit for him.” Michigan and SMU are also in the mix. “Michigan has done a pretty good job,” Gary said. “I hear from SMU quite a bit. I talked to Larry [Brown] on the phone a few times.” Locals Seton Hall and Rutgers are in the mix as well, but don’t seem like high priorities. “They’re still on the radar,” Gary said.

Corey Sanders Returns with a Bang