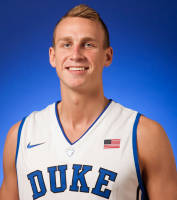 By JOSH NEWMAN Special to ZAGSBLOG NEW YORK – Duke guard Alex Murphy is transferring at the end of this semester and at least one person very close to him would like to see the 6-foot-9 redshirt sophomore forward end up at Florida. “I would love to see him go to Florida, but it’s his decision,” Erik Murphy, his older brother and a former Gators star, told SNY.tv Wednesday evening before his Chicago Bulls took on the Knicks at Madison Square Garden. “He’s going to come to the conclusion that he wants to and hopefully, it works out for him this time.” Erik Murphy played in 136 games, scored 1.052 points and advanced to the Elite Eight three times at Florida before being selected by the Bulls with the 49th overall pick in the 2013 NBA Draft. With credentials like that, it is widely-assumed at this point that his younger brother, who will have just one and a half seasons of eligibility remaining, will end up in Gainesville. Wherever he ends up, there is little room left for a bad decision and his older brother has tried to convey just that. “I told him the same thing I told him when he was making this decision for the first time,” Murphy said. “This is his decision and he has to do what he wants and go where he thinks he’s going to be the happiest. That’s the key. If you go somewhere and your heart’s not in it, it’s just not going to work.” If the pick is Florida, he will not be suiting up this season for a Gators squad that is beginning to get healthy, as well as eligible, after a slew of early injuries and suspensions. With senior guard Scottie Wilbekin and highly-touted freshman guard Kasey Hill back in the fold, Florida moved to 7-2 with a 67-61 home win over freshman phenom Andrew Wiggins and Kansas. “I think they have the talent to win the whole thing, I really believe that and I’m sure they do, too,” Murphy said. “They just have to come every day, continue to get better and stay healthy. If they play well, anything can happen.” Murphy has kept tabs on this Florida team and believes that its ceiling is another deep run into March if everyone stays on the same page. “They have a lot of talent and a few older guys,” Murphy said. “When you’re a senior, they realize it’s always different. It’s a much different mentality when it’s your last go-around. I’m excited for them. Those were my teammates, my boys, so it’s exciting to watch them.” While Wilbekin and Hill are back, Florida is awaiting the debut of Chris Walker.  The 6-foot-10, 5-star recruit was ruled academically ineligible for the fall semester, but is expected to enroll for the spring 2014 semester, at which point he could have a major impact on the second half of the season. Walker has already been ruled out for Tuesday against Memphis as part of the Jimmy V Classic at Madison Square Garden.  Follow Josh Newman on Twitter