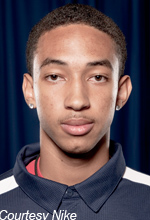 By JACK LeGWIN Special to ZAGSBLOG One of the most underrated players in the Class of 2014 is close to making a college choice. Jordan McLaughlin, a 6-foot, 165-pound point guard out of Etiwanda Rancho Cucamonga (Cal.) High School, narrowed it down to four schools a week ago, Kansas, Indiana, Southern California and UCLA. On Friday evening, McLaughlin’s AAU coach, Cameron Murray gave a little insight into each of the schools, the process that Jordan is taking at the moment and the timing of the decision. “He likes the recruiters a lot at Southern California,” Murray told SNY.tv of coach Andy Enfield’s program. “As of right now, its hard to tell how he’d fit in, because its such a new system. The young recruiters are making a big impact though with the recruits because of the relationships they have with them.” The other in-state school that is on McLaughlin’s radar is UCLA. If he commits to UCLA, he will join Indianapolis (IN) Park Tudor wing Trevon Bluiett, one of the best scorers in the country. “Jordan has a pretty good relationship with (coach) Steve Alford.” Murray said. “They have a new staff as well, and each staff has a different style, but UCLA has always been with his family, number one in their hearts.” While the two local schools have McLaughlin’s attention, the blue bloods were not left out of his list. “He likes Kansas because of the system that they run,” Murray said. “He likes them because not all of their players are a one-and-done, or a two and done, they’re all about trying to win championships and developing players.” If McLaughlin chose Indiana, at the moment, he would be Tom Crean’s first commitment in the class of 2014. “I think Jordan likes Indiana so much, because of the system that they run with the guards,” Murray said. “Watching the guards get up and down the court and being creative. The tempo that they run is up-tempo, and is perfect for him.” According to Murray, the decision isn’t that far off. “I think he is going to try to make a decision in the next couple weeks,” Murray said. Follow Jack on Twitter