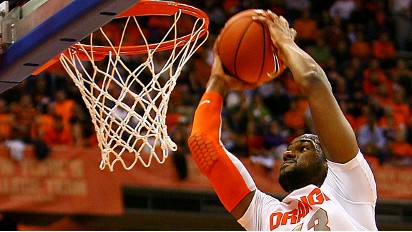 Former Syracuse sharpshooter James Southerland has found a home. Southerland will go to training camp with the Charlotte Bobcats. The 6-foot-8 Queens native went undrafted this year but played with the Philadelphia 76ers in the Orlando summer league and with the Golden State Warriors in Las Vegas. “He hasn’t signed yet but we have an agreement that he will sign with [Charlotte] probably right after Labor Day,” agent Mark Bartelstein told SNY.tv. “There were a number of teams that were heavily pursuing him and we just felt like Charlotte was the best opportunity for him. They’re a young team and we feel like James’ athleticism and perimeter shooting will fit in perfectly. I think it’s a great opportunity for James.” In March, Southerland broke the Big East Tournament record by hitting 18 3-pointers in the event to break Gerry McNamara’s record. He averaged 13.3 points and 5.2 rebounds for the season. “He’s athletic and long,” a veteran NBA scout said then. “He shoots it from all over. He would be a nice pick for someone wanting instant offense off the bench.” Photo: Getty Images

Emmanuel Mudiay to SMU; Will Play With Brother (UPDATED)