Ty Graves: The Next Stephen Curry? 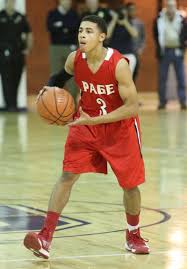 By JACK LeGWIN Special to ZAGSBLOG — Ty Graves is ready to live up to expectations. The 5-foot-10 Class of 2016 point guard out of Page Greensboro (N.C.) High School has really impressed college coaches all over the country with his sharp-shooting and his ability to lead his AAU team, the Karolina Diamonds, over the course of the summer. Son of Kevin Graves, and cousin of former UNC-player Will Graves, Ty knows that there will be an expectation to pick North Carolina when the time comes, but he doesn’t feel the pressure of making the choice. “I wouldn’t feel any pressure at all,” Graves told SNY.tv. “If I got an offer from there, I would be delighted, but I wouldn’t feel any pressure.” While his cousin went to UNC, Graves’ dream school might shock someone. “Its funny,” Graves said. “Everybody is asking me what my favorite school is. I really like Duke. I think that is my dream school. I like Carolina. Just because my cousin went there, a lot of people think that if they offered me, I might go there, but If Duke offers me, I would probably go there.” Graves is rumored to be a highly sought after prospect from the ACC schools, and is projected to grow as well, to be around 6-2 to 6-3, which explains why he models his game after a player who went to college right down the road at Davidson. “I see myself modeling my game after Stephen [Curry], ” Graves said. “The way he shoots, I try to watch videos of him, and copy what he does a bit.” Being one of the best point guards in the class of 2016, Graves has quite an expectation to live up to in North Carolina. If he continues the way he is going right now, the name “Graves,” will continue to be heard, not only in North Carolina, but nationwide. Follow Jack on Twitter