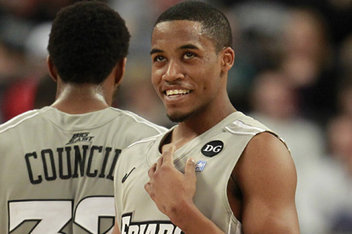 While the U.S. U19 World Championship Team prepares to play this week in Prague, Czech Republic, Providence’s Bryce Cotton and 25 other top college players arrived at the U.S. Olympic Training Center for the start of the USA World University Games Team training camp. “So far, so good, today was the first day,” the 6-foot-1 Cotton told SNY.tv by phone Monday night. “It was good for everybody to get their feet wet and just get integrated to all these different players.” A rising senior who was an All-Big East selection last year and was named to the SNY All-Big East Preseason Team, Cotton led the Big East in scoring last season at 18.3 points per game. This training camp gives him a chance to match up against other elite college guards like New Mexico’s Kendall Williams, Notre Dame’s Eric Atkins and Nevada’s Deonte Burton. “It’s really good playing against other stiff competition to measure yourself and see where you’re at,” Cotton said. Davidson’s Bob McKillop leads Team USA, with assistant coaches John Beilein of Michigan and Frank Martin of South Carolina. The coaching and the competition should help Cotton heading into his senior year with the Friars. “It’ll definitely help because we do play in a good conference, but it’s always good to play against top players from other conferences as well,” Cotton said. “It’s just better experience and better competition so it makes it that much easier when the season comes into play.” Providence loses guards Vincent Council and Ricky Ledo as it heads into the new 10-team Big East, but still returns Cotton, Kadeem Batts, Kris Dunn and Josh Fortune, while adding transfers Tyler Harris and Carson Desrosiers. Ed Cooley’s club also adds high-scoring guard Brandon Austin, who recently scored 91 points in a charity game. “I think we’re going to be really good,” Cotton said. “We still have a strong core coming back and we add a couple of good transfers who sat out this previous year who are going to help contribute significantly. Time will tell soon enough come next November.” Last year, Cotton led the Friars to a 19-15 mark, a 9-9 record in the Big East and a 2-1 mark in the NIT. “We were hoping to make [the NCAAs], but once we got word that we made the NIT, we wanted to make the best of that and we eventually lost to the people who won it all,” Cotton said. As for the new Big East, Marquette’s Davante Gardner and Creighton’s Doug McDermott, the SNY Big East Preseason Player of the Year, are also training with the World University Games team. “I haven’t talked to anybody about the new conference but there’s a couple people out here who I will be playing against so it’s good to get a sneak preview of their skillsets,” Cotton said. For now, Cotton hopes to make the final roster after the cut at the end of the month. “It would mean a lot,” he said. “You go out there and you represent your country. It’s definitely an honor to be out here, but the final goal is obviously  to come out here and try to make the team.” **Click here for more stories on USA Basketball.

In Wake of Father's Death, Hancock Forging Ahead With USA Basketball