Gorgui Dieng Says Louisville Will Be Better Next Year 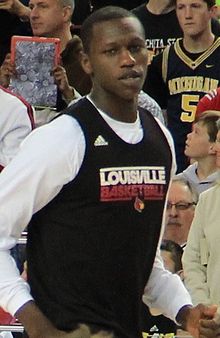 GREENBURGH, N.Y. — Gorgui Dieng won an NCAA championship with Louisville this past April, but the big man believes the Cardinals will be even better in 2013-14. “I think they’re going to have a better team this year,” the 6-foot-11 Dieng said Tuesday following his Knicks workout. “It’s tough to believe but I think they’re going to have a better team. They have a lot of guards and the biggest guy on the team is 6-8. So they’re going to do the things that they are known (for), which is like press, press more, press more because they have a lot of guards. Last year we had a lot of bigs but this year we have more guards. We have four, five guys coming in.” Louisville lost Dieng — a projected first-round pick — and point guard Peyton Siva — a projected second-rounder. But they return virtually everyone else from the team that dispatched Michigan in the NCAA title game. Rick Pitino’s club brings in point guard Chris Jones, the National Junior College Player of the Year, as well as point guard Terry Rozier, shooting guard Anton Gill and center Akoy Agau. Louisville and arch-rival Kentucky have won the last two NCAA titles, and could vie for a third next spring. The teams will also play a highly anticipated game Dec. 28 at Rupp Arena. “Kentucky always have a chance to win it,” Dieng said of the Wildcats and their historic incoming recruiting class, highlighted by Julius Randle and Andrew and Aaron Harrison. “They always have the best players and always, I don’t want to say best players, they always have the chance but are they going to be a team? We don’t know. You can have a lot of pieces but it’s tough to have a team.” By contrast, Dieng said Louisville, which doesn’t have a single one-and-done talent, is more of a team. “We always have a team. we always have a team,” he said. “Thats what Coach ‘P’ is all about – team. He doesn’t care who you are . You can be the best player but if you do something wrong, he’s going to sit you down. If you’re body fat is over nine percent, you won’t play.”
If Louisville does turn out to be better next year than last, that would be something. But regardless, the Louisville-Kentucky rivalry should continue to be fun to watch.

Dieng Believes He Can Help Knicks