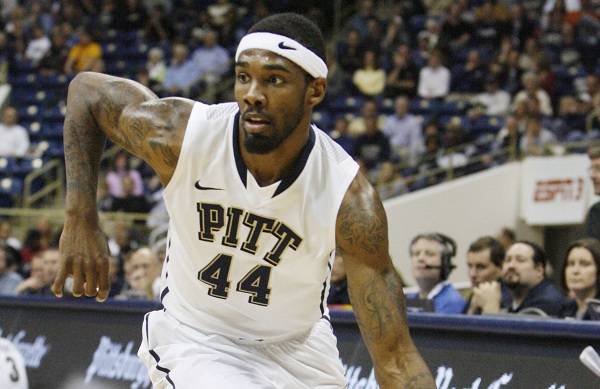 Former Pittsburgh forward J.J. Moore has committed to Rutgers upon his visit there Thursday. “J.J. committed to Rutgers,” New York Panthers coach Gary Charles told SNY.tv. “[Assistant coach] Van Macon was extremely critical in J.J. deciding to go to Rutgers. His ability to address the family concerns and make J.J. feel important tipped the scale in Rutgers’ favor.” Charles said Moore will apply for a hardship waiver in order to play next season because his grandfather is ill. “Yes, he will try to get a waiver,” Charles said. Without a waiver, Moore would have to sit a season, per NCAA regulations and would suit up in 2014-15 when Rutgers joins the Big Ten. He would be 23 by the start of the 2014-15 season. Moore also considered Iona and Quinnipiac. The 6-foot-6 Brentwood, N.Y., native averaged 8.0 points and 3.0 rebounds in 18.7 minutes per game off the bench for the Panthers last season. He scored 14 points at Rutgers and 21 at DePaul. Moore initially chose Pitt over Louisville and St. John’s. Earlier this week, Eddie Jordan’s team received a pledge for 2014 from junior college guard Bishop Daniels. MBARGORBA VISITS BU Former SMU center Blaise Mgargorba is currently on an official visit to Boston University, sources told SNY.tv. He is expected to visit Seton Hall at some point and is also considering Monmouth and others.

Study Says Louisville Has No. 1 Fan Base & Kentucky Is No. 7