With Calipari Looking On, Mays Turns in Solid Outing at Nets Draft Combine 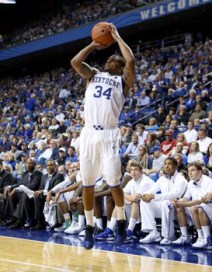 EAST RUTHERFORD, N.J. – When Julius Mays decided to go from Wright State to Kentucky before last season, the one-year transfer had academics in mind, citing the school’s sports leadership master’s program as a big reason why. Still, Mays, who began his career at North Carolina State, harbors aspirations of playing in the NBA and if he was to move towards that goal, there are few better roads to get there than the Wildcats and head coach John Calipari. “If I didn’t make that decision, I wouldn’t be here right now,” Mays told SNY.tv following a solid showing at the Nets Draft Combine on Thursday afternoon. “Even with the season we had, I’d make that decision 10 more times just knowing the outcome and just to get the opportunity to play for Coach Cal. In his one season in Lexington, a down year by program standards, Mays moved over from his natural position of point guard to play shooting guard. He averaged 9.3 points per game and shot 37 percent from 3-point range while seeing action in all 33 games for the young Wildcats, who finished 21-12 and lost in the first round of the NIT at Robert Morris. “I was playing in a position I really wasn’t used to playing with the ball out of my hands, running off screens. but it taught me a lot,” Mays said. “It put another dimension into my game because I had never really run off screens. Playing for Coach Cal and just learning, playing in that system, which is like a pro system, it taught me a lot.” As he makes his way through the draft process, the 6-foot-2, 190-pound Mays projects as a point guard at the next level. Thursday brought about the chore of tangling with speedy 5-foot-10 Baylor product Pierre Jackson once the action at PNY Center got to 5-on-5 play. Mays admittedly had some trouble staying with the smaller, quicker Jackson, but thought he played well off ball-screens and creating something off those ball-screens. Ball-screens, as he noted, are a large part of the offense in today’s NBA. He scored 17 points in the two-quarter, 24-minute scrimmage while showing a willingness to take and consistently make open jump shots. Calipari, the one-time New Jersey Nets head coach, was back at the team’s practice facility taking in Mays’ workout and he came away impressed. “He handled the ball well and from what I saw, I probably should’ve played him more at point guard,” Calipari joked to SNY.tv after the session ended.  “He is a veteran college player. In other words, he’s a four-year guy and a guy who is skilled, will make open shots and he’s capable of playing 1 or 2. If you’re on a team that’s gonna trap and do things, he can do that.” Mays is currently predicted to go undrafted by DraftExpress, but a summer league invite as an undrafted free agent is very much in play if he continues to perform well in workouts leading up to the NBA Draft on June 27. Photo: Getty Images Follow Josh Newman on Twitter