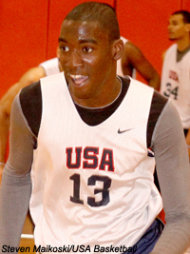 By JEREMY WOO Special to ZAGSBLOG  CHICAGO — Every NBA draft has its unknowns, names full of intrigue and potential, boom-or-bust players who can make general managers look like a genius or help get them fired. From the high-major studs to the European imports, all hoped to increase their stock this week at the Chicago Pre-Draft Combine. And all things considered, perhaps the most enigmatic player in the gym was Norvel Pelle. Standing nearly 6-foot-11 in shoes, with over seven feet of wingspan and a 9-foot-1 inch standing reach, Pelle certainly looked the part of an NBA prospect. Though only 207 pounds, you couldn’t help but notice his raw athletic ability. The upside was obvious. The thing is, hardly anyone had seen him play. Pelle, once a top-ranked high school center out of Los Angeles, never took the floor for a college team, unable to meet the NCAA’s academic eligibility requirements. He committed to St. John’s and head coach Steve Lavin in 2011 but was ruled ineligible that August along with fellow commits JaKarr Sampson and Amir Garrett. While Sampson and Garrett eventually ended up with the Johnnies, Pelle never did. Last August, Pelle committed to Iona — which has a history of success giving players second chances — and was compared by some to Kevin Durant. “I think he’s going to be what everybody is comparing him to right now,” Rambo Rasheed, Pelle’s mentor, told SNY.tv last August. “A ‘KD type of player. a new age KD. Honestly, I think he’s going to be the new age basketball player. “He’s 6-11, he can handle exceptionally well. He can shoot it exceptionally well from the mid-range. He’s one of the fastest people up and down the court. His athleticism speaks for itself.” The Gaels could’ve used him during their second straight NCAA Tournament appearance. “Norvel has unlimited potential and we thought in our up-tempo systeam he would be our most talented player and a possible Player of the Year candidate as a freshman,” Iona associate head coach Jared Grasso told SNY.tv. “With [head coach] Tim [Cluess’s] success developing players and Norvel’s tools there is not telling the success he could have had at Iona.” But a funny thing happened on the way to becoming the next Durant. Pelle never made it to Iona and fell off the grid. One year later, the Los Angeles native has resurfaced at the combine, hoping to catch on in the league and rediscover the dream that was once all but lost. NBA executives have taken note of Pelle’s talents — still very much raw, but clearly a possible steal for someone willing to take a chance. What’s more, he’s just 20 years old. Pelle has interviewed with teams including Atlanta, Houston, Memphis, Miami, New Orleans and Portland, making his case to be selected in June’s draft. “They want to know what happened last year, the reason I didn’t go to college and what I’ve been doing,” said Pelle. “I got it together, I went to prep school [at Malvern Prep in Pennsylvania and Stoneridge Prep near Los Angeles] and I’ve been taking care of my mom. I’ve just been focusing, trying to get ready.” Many teams had already taken a look at Pelle during private workouts, but the combine provided more than that — it was a measuring stick opportunity for the lanky center. “Just being here and going through the experience of the combine, being with the top 60 players, it’s a lot of fun,” Pelle said. “I did pretty well, I thought I held my own. I still have to get stronger, but I did what I had to do.” His post game is still developing, but Pelle is confident he can help an NBA team in the future. He wasn’t concerned about where he’d be drafted — he hadn’t even discussed it yet with agent Cervando Tejeda. “He’s probably a guy who’ll have to make it via the NBA D-League,” one Western Conference GM told SNY.tv. One veteran NBA scout was more blunt, calling Pelle “an AAU tragedy who got bad advice. Wasted years of development. Get his passport ready.” Hungry for a second chance, Pelle kept it simple at the combine. “Blocking shots and running the floor are my strengths,” he said. “I can bring energy and heart…just the willingness to come and play hard every day.” It’s no secret the odds for NBA success aren’t in Pelle’s favor. He knows there are things he could have done differently. He says all the trouble is in the past. Given all he’s been through, there’s still plenty left to be accomplished, and it will continue to drive him forward. “Being the underdog in this whole combine is really motivational,” Pelle said. “Just to get picked and not have any game film, I’m really motivated to be here. Anywhere I end up, I’ll be happy.”
Follow Jeremy on Twitter

Former Syracuse Players in Favor of ACC Tourney at MSG