Konchalski: Wiggins to Kentucky Still Wouldn’t Mean No. 1 Recruiting Class of All Time

If Andrew Wiggins does pick Kentucky on Tuesday, thereby giving coach John Calipari seven McDonald’s All-Americans on next year’s roster, it still wouldn’t be the greatest recruiting class in the history of college basketball. So says Tom Konchalski, who has been covering high school recruiting since the 1960s and has authored the High School Basketball Insider since 1979. According to Konchalski, UCLA scored the greatest recruiting class ever when it landed Ferdinand Lewis Alcindor, Jr. out of New York’s Power Memorial Academy in 1965. “Yes,” Konchalski told SNY.tv. “I still think because the proof of the pudding is in the eating, the proof of the recruiting is in the winning, and no one ever won bigger than Ferdinand Lewis Alcindor. Eighty-eight and two on the varsity, 21-0 on the freshman team. “Had he not had the scratched cornea and the 103 fever, he would’ve been 90-0 and 111-0.” Alcindor led Power Memorial to three straight New York City Catholic championships, a 71-game winning streak, and a 79–2 overall record. While at UCLA, Alcindor joined the Nation of Islam and became Kareem Abdul-Jabbar. He led the Bruins to three straight NCAA titles from 1967-69 and won three straight Final Four Most Outstanding Player awards. 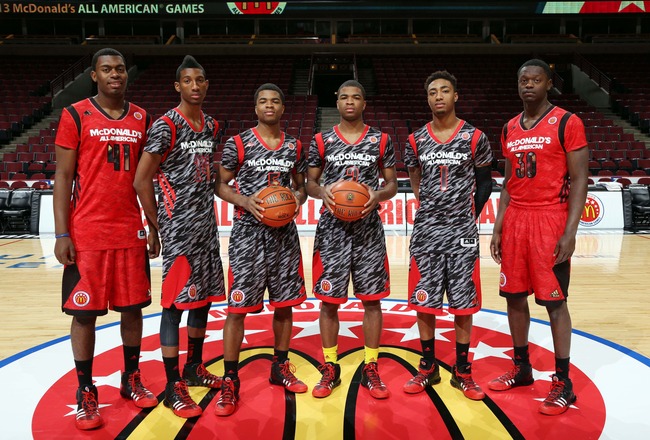 Still, Konchalski says that Kentucky already has the “deepest” recruiting class ever with six McDonald’s All-Americans in Julius Randle, Andrew and Aaron Harrison, Marcus Lee, James Young and Dakari Johnson. Adding Wiggins — who will announce Tuesday for Florida State, Kansas, Kentucky or North Carolina — to that group would only make it that much deeper. “It certainly is the deepest class,” Konchalski said. “It is with or without Andrew Wiggins. No one’s ever had six McDonald’s All-Americans in one class.” But whatever Kentucky accomplishes in the next two years, Konchalski still maintains that Alcindor by himself represented the greatest recruiting class ever. “Yeah, just because look what he did,” Konchalski said. “Look what he did. These guys don’t stay four years the way Alcindor stayed. Would they run the table for the let’s say one year or two years? No, they’re not going to do that.” **For previous articles on Andrew Wiggins, click here.

Nerlens Noel Not Worried About Being No. 1 Pick

Meet the Man Who Will Break the Andrew Wiggins Story