Jon Severe confirmed that he will meet with new Rutgers coach Eddie Jordan at 9 p.m. tonight, but told SNY.tv he has not officially added Rutgers to his list of four schools.

Right now, his original list of four stands and he is due to announce at 2:30 p.m. on Wednesday at Christ the King.

“I have my four schools — West Virginia, Fordham, Pitt and Wake Forest,” Severe told SNY.tv by phone. “I never met the guy Eddie Jordan. I’m cool with [Rutgers assistant] Van [Macon], so I’m meeting him tonight with my [AAU] coach Shandue McNeil. Tonight will be the first time me meeting him.”

The New York Post reported that the 6-foot-2 Severe, Mr. Basketball in New York State, was leaning toward Fordham or Rutgers, but Severe disputed that.

“He made it seem like it was either Rutgers or Fordham, it’s not that at all,” Severe said.

Despite being on the shelf with an ankle injury, Leron Black is in the midst of hosting some big-time schools this week.

Hurd said Black, who decommitted from Baylor in January, plans to definitely take official visits in the fall to UConn and Florida.

Daniel Hamilton is a 6-foot-6 shooting guard from Los Angeles St. John Bosco whose stock is on the rise.

Hamilton may visit UConn in early May, as first reported by Eric Bossi of Rivals.

“I think I might visit UConn soon,” Hamilton told SNY.tv. “I’m not sure yet because it’s not for sure.”

On the same day that Eddie Jordan will be introduced as the new head coach at Rutgers, two players on the current roster will be taking steps out the door.

“I think with [former St. Anthony player and Florida assistant] Rashon Burno there and two guards leaving [Mike Rosario and Kenny Boynton], one guard signed, [Kasey] Hill is the only guard coming in, they can I think talk to him about playing time.

RIP Richie Havens – Thanks for the Music

[youtube=http://www.youtube.com/watch?v=fA51wyl-9IE&w=420&h=315]
RIP to Richie Havens, who died today at 72 in Jersey City, N.J., of a heart attack, but tried to make the world a better place through his music.

Here he is opening Woodstock with “Freedom” and later playing the Beatles’ “Here Comes The Sun.”

Here’s an excerpt from his obit on Bloomberg:

Chandler Ready for More Touches by Garnett in Game 2 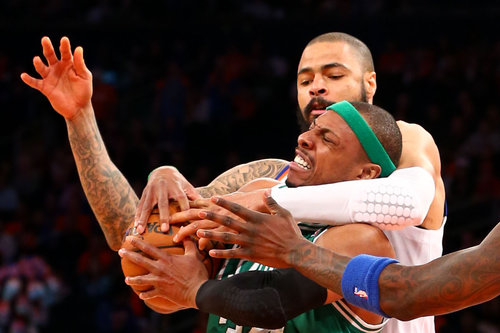 GREENBURGH, N.Y. — With Kevin Garnett expected to get more touches in Game 2 on Tuesday night, Tyson Chandler knows it’s more important than ever that he round back into form from his neck injury.

Chandler was essentially a non-factor in Game 1, going scoreless and block-less with five rebounds in 20 minutes of the Knicks 85-78 victory.

“Yeah, absolutely,” Chandler said Monday at practice. “I expect [Garnett] to get more shots. We just have to do a good job defending him down in the paint as well as making sure he doesn’t get any open jump shots.”