Woodson: ‘I don’t really care what people think about Melo’

Mike Woodson gave perhaps his most staunch defense ever of Carmelo Anthony on Wednesday.

Responding to a question about critics of Anthony, Woodson said: “Me personally, I don’t really care about what other people think about Carmelo Anthony because those people are not around Carmelo every day. I see Carmelo pretty much every day. I see his teammates every day. And I know the work that the young man has put in as a player.

“And a lot of these people probably never played basketball in their life and they make these comments about Melo and not being committed and they don’t think this and think that. Well, I think Carmelo is damn committed and he’s been that way since I’ve taken over the team, and that’s the only thing I can judge him by. And I like everything about him. I think his teammates love him. I think the fans here in New York love what he’s brought to the table this year in terms of his play on the floor. And we’ve all benefitted from it. And only time will tell. 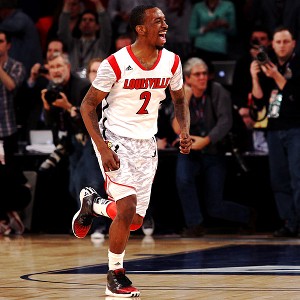 Louisville will get an important piece of its NCAA championship team back next season when junior guard Russ Smith returns to campus.

Pitino told reporters that Smith wants to graduate, become a first-team All-American and move up into the first round of the NBA Draft, according to Eric Crawford.

“I love to win,” Smith said. “With the group we have coming back, I want to go out as a winner, and to graduate.”

Khadeem Lattin is one of the more interesting stories in high school basketball.

After living and playing overseas at the Canarias Basketball Academy, the 6-foot-9, 205-pound center returned to the U.S. last year and is now home-schooled in Houston.

He plays high school ball for Redemption Christian HomeSchool Academy, and averaged 21.6 points and 6.4 rebounds last season, according to MaxPreps.

His mother, former WNBA player Monica Lamb, said her son is focusing on a few schools at this point.

Demetrius Henry is off the board.

Felton Leaving Linsanity in the Dust

NEW YORK — Raymond Felton is leaving Linsanity in the dust.

Remember when some fans and talking heads criticized the Knicks last summer for signing Felton and choosing not to re-sign Jeremy Lin?

Up 2-0, Knicks Looking Towards Emotional Atmosphere in Boston

NEW YORK – Down 2-0 in their best-of-seven first-round series following an 87-71 loss to the Knicks on Tuesday evening, it’s not like the Boston Celtics and their fans need any further reason to get psyched up as the series heads to TD Bank Garden for Games 3 and 4 on Friday and Sunday, respectively.

However, these are rare, unsettled times in Boston thanks to the bombing at the Boston Marathon on April 15 that killed three people and wounded nearly 200. In the wake of the bombing, the Celtics final home game against the Indiana Pacers was canceled, meaning that they haven’t played at home since the bombing. That alone should make for an emotionally-charged atmosphere on Friday evening.

“We’re fine, we take it one day at a time,” Carmelo Anthony said. “We’ll deal with Friday’s game when that day comes. We gotta prepare for that, we gotta prepare for the emotions that will be taking place in Boston on Friday. But as a team, we gotta go in there being together, staying together, knowing that it’s going to be a game of runs, knowing that it’s going to be very emotional in that building.”