Larry Brown Has Doubts About the American Athletic Conference 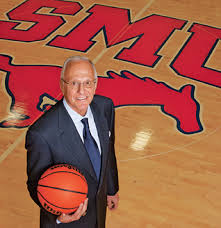 ROSELLE, N.J. — When Larry Brown took the SMU job in April 2012, he did so in part because the Mustangs were eventually headed to the Big East Conference. Brown looked forward to matching wits with coaches like Louisville’s Rick Pitino, Georgetown’s John Thompson III and Villanova’s Jay Wright. “That was one of the biggest selling points in going to SMU,” Brown told SNY.tv last Friday at a coaches’ clinic at Roselle Catholic High School. “To have an opportunity to be in the Big East I thought would be so great for our program.” But the Big East has shifted dramatically since Brown, 72, returned to coaching at SMU. Louisville is headed to the ACC in 2014, following Syracuse, Pitt and Notre Dame out the door. And the seven Catholic schools that comprised the heart of the league are leaving and taking the Big East name with them. So where does all that leave Brown and SMU? In an uncertain situation, that’s where. Instead of coaching in the Big East, Brown will now coach in something called the American Athletic Conference featuring the football remnants of the Big East. “Next year we’ll be in a great conference with Louisville, Connecticut, Temple, Memphis, Rutgers, but I don’t know what lies in store later on,” Brown said. “I just hope that we get better and kids want to come to our place.” Meantime, Brown speaks almost wistfully about the potential of the new Big East of which he won’t be a part. “I look at that conference, the Catholic 7 and you add Xavier, Creighton and Butler, wow, that’s a pretty darn good conference,” Brown said. “I think that’s a great conference in itself.” After going 15-17 last season, 5-11 in Conference USA, SMU should be improved next season. The team returns all five starters, including leading scorers Jalen Jones and Nick Russell. The Mustangs recently added five-star shooting guard Keith Frazier to a class that already includes four-star 6-4 guard Sterling Brown from Chicago Proviso East High School. SMU should be a good story next season, especially when Brown, a Philly native and the only man to win NBA and NCAA titles , visits places like defending NCAA champion Louisville, along with Temple, Rutgers, UConn and Memphis. But would it be shocking to see Brown hang it up after next season, and hand over the reins to associate head coach Tim Jankovich? He didn’t indicate he would, but beginning in 2014-15, the American Athletic Conference will essentially be Conference USA. By then, Louisville and Rutgers will both be gone, and only UConn, Cincinnati and South Florida will remain from the old Big East. “I think what’s happening in college athletics stinks,” Brown said. “Great conferences are broken up. “I was an assistant coach with Coach [Dave] Gavitt on the ’80 Olympic team and I kind of know what the Big East meant to him, and living in Philly, it’s the greatest basketball conference ever.” Like many across the college sports landscape, Brown can’t believe how things have unfolded in recent years. “Can you imagine, Texas doesn’t play Texas A&M, Kansas doesn’t play Missouri, Maryland doesn’t play Virginia, Duke, North Carolina,” he said. “I think it just hurts athletics.”

Williams, Self, Hamilton to Meet With Wiggins (UPDATED)

Shabazz Muhammad to the NBA Draft