Melo Empathizes With Kobe After Injury 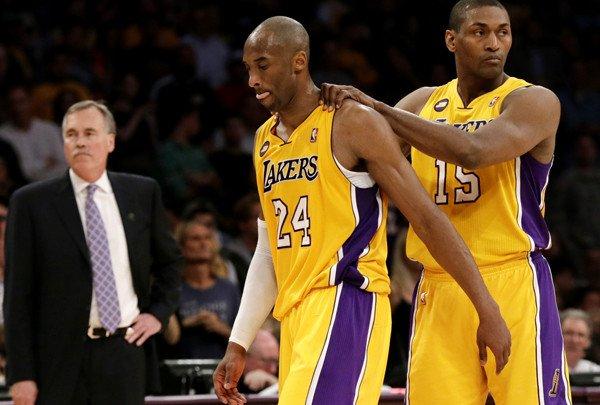 NEW YORK — Carmelo Anthony said it was tough to see his friend Kobe Bryant go down with the season-ending Achilles’ injury. “That was a tough for him to go down like that,” Anthony told SNY.tv and one other outlet after watching the Jordan Brand Classic at Barclays Center Saturday night. “As a friend, as a brother, I never want to see him go out like that.” Bryant is sidelined 6-9 months with a torn left Achilles’ tendon but Anthony thinks he’ll make it back next season. “I’m pretty sure he will,” he said. “That’s Kobe, of course.” NBA teams begin playing around Oct. 31, and Lakers GM Mitch Kupchak told the L.A. Times, “I think that’s a realistic goal for him.” Anthony and teammates Amar’e Stoudemire and J.R. Smith sat courtside along with C.C. Sabathia, Worldwide Wes and Drake to watch the stars of tomorrow in the Jordan Classic. Michael Jordan himself sat in the stands. Five of the top 10 projected picks in the 2014 NBA Draft were on hand, including Canadian star Andrew Wiggins, who had 19 points in the East’s 102-98 loss to the West. Both Anthony and Stoudemire said they were impressed by Wiggins, who is deciding between Kentucky, Kansas, North Carolina and Florida State. “He’s good,” Stoudemire said. “He showed athleticism out there on the court. He showed great patience also. He’s going to be really good.”

Jaren Sina Getting Closer to a Decision