In Wake of Devastating Fire, Carter-Williams Plays On With Inspiration | Zagsblog
Follow @adamzagoria

In Wake of Devastating Fire, Carter-Williams Plays On With Inspiration 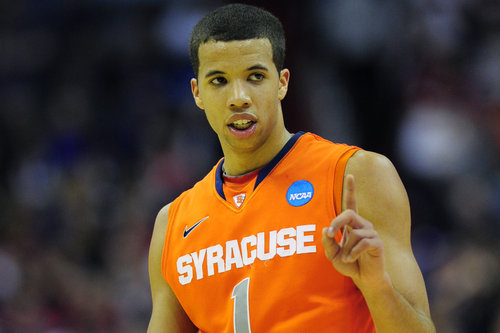 WASHINGTON, D.C. — After the best performance of his young life, Michael Carter-Williams walked over toward the stands at the Verizon Center, flapped his Syracuse jersey and pointed up in the direction of his family, a group that is dealing with some very tough circumstances right now. Carter-Williams was not just celebrating his game-high 24 point-performance in No. 4 Syracuse’s 61-50 upset of No. 1 Indiana in the East Regional semifinals that set up Saturday’s Elite Eight showdown with Big East rival Marquette. He was letting his mother and stepfather — Mandy and Zach Zegarowski — know that everything was alright, that he was carrying on with inspiration and dedication, despite a fire that on Saturday engulfed the family’s home in Hamilton, Mass. Zach and Carter-Williams’ twin 14-year-old brothers were watching Syracuse’s second-round game with Cal at the time. Fifty-eight seconds into Syracuse’s 66-60 victory that set up the Sweet 16 showdown with Indiana, Zach noticed smoke coming from the kitchen and the whole house ultimately went up in a blaze. Carter-Williams and his family lost all their belongings, sentimental and otherwise, but fortunately no one was seriously hurt. “We’ve been going through some tough times and I’m just trying to bring a smile to my family’s face and have them enjoy themselves,” Carter-Williams said. “I’m so proud of him, especially in this situation,” Mandy said of her son. “It could’ve gone either way.” As Carter-Williams and teammate Brandon Triche (14 points) punished Indiana’s smaller guards by repeatedly going to the basket or stepping back for 3’s, Carter-Williams occasionally looked over at his mother and family to both give and draw support. “She’s doing good,” he said of his mom. “I was real happy to see the smile and the clapping on the sidelines, and it couldn’t be any better.” For the few hours that Carter-Williams was on the court, he said he wasn’t thinking about the fire and everything that was lost. “No, I’m not thinking about it, I’m just trying to focus and that’s what my teammates deserve ,” he said. “It’s tough, but they deserve all my attention and all my hard work.’ Yet those closest to him say Carter-Williams is using the unfortunate turn of events as motivation. “I think it puts more weight on the family, Mike won’t let them lose,” Syracuse associate head coach Mike Hopkins told SNY.tv in the locker room. “I’m not letting these guys lose, meaning I want to go and play for my Syracuse family and my family. “He’s using it as a motivation, rather than a distraction. And I think in anything, like the great fighters or the great whatever, they can use negatives and turn them into a positive. You would never even know that anything happened with him. But he played with an edge tonight.” “Obviously, you’re happy that no one got hurt and that his mom and dad and his siblings and their uncle is helping them,” Syracuse coach Jim Boeheim said. “They’ve got a place to live. They’ve got insurance, I think that will work itself out.” Boeheim said Carter-Williams’ performance on this big stage against a team ranked No. 1 for a good part of the season was his best ever. “This was the best he’s played all year,” Boeheim said. “He was the difference it the game on offense, clearly.” It was tough for Carter-Williams to disagree. “In college, yeah probably this is the best game I ever played,” he said. “It was a real big-time moment and as a leader on this team I just wanted to step up and play the best I can.” And now, with at least two more days to a season that could stretch into another Syracuse Final Four, Carter-Williams can give himself — and his family — something besides tragedy to focus on.