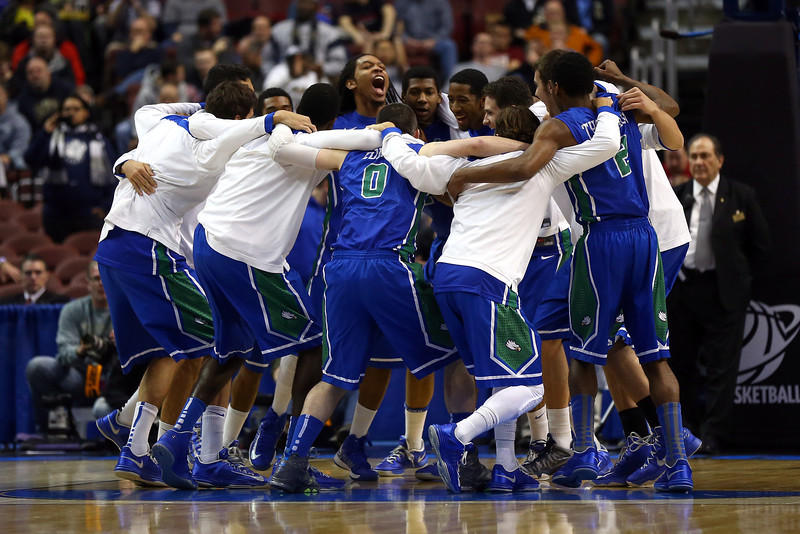 PHILADELPHIA – While his players looked shell-shocked sitting on a dais in the bowels of the Wells Fargo Center on Sunday evening, San Diego State head coach Steve Fisher was the picture of calm following the Aztecs’ 81-71 loss to Florida Gulf Coast on Sunday evening. It’s important to understand that after 22 years of head coaching experience Fisher isn’t surprised by anything anymore, not even a running, jumping, alley-ooping 15th-seeded Eagles team that has become something more than just your average NCAA Tournament darling. Florida Gulf Coast may not be your average darling, but the Eagles are most certainly the latest college basketball phenomenon, a topic Fisher could probably write a dissertation on after being on both sides of them in his time. His exploits coaching the Fab Five in the early 1990’s and now getting beaten by Florida Gulf Coast are well-known, but a generation ago, the 68-year-old coach was part of another phenomenon. “I was coaching when Hank Gathers died and we played Loyola Marymount in the second game of the tournament in 1990,” Fisher said. “We had a lot of guys back from a team that won a national championship the year before and they ran us off the floor. They had a momentum and a flow that captivated, not only a community, but the country.” Gathers died from a heart-muscle disorder on March 4, 1990, collapsing during a West Coast Conference Tournament quarterfinal. Playing with heavy hearts as an 11-seed in the West Region, the Lions made an unlikely, captivating run to the Elite Eight. Along the way, it scored a 149-115 over a Wolverines outfit that Fisher had taken over the previous season before the NCAA Tournament and led it to the national title. “They play with a swagger and they have a right to do that,” Fisher said. “You can have that look and feel, but you have to compete and play to earn your spurs and they’ve done that. Florida Gulf Coast is getting that (confidence) right now. How far that will take them? Who knows, but I know they’re not gonna be afraid when they make that trip to Arlington to play in the Sweet 16.” Thankfully, Florida Gulf Coast has not had to deal with tragedy as Loyola Marymount did, but it has seemingly come out of nowhere while capturing America’s attention just the same. “We don’t play quite like that, but we try to push the basketball,” Florida Gulf head coach Andy Enfield added. “I think we’re averaging 79 points a game in the postseason, our three conference games and two NCAA Tournament games.  So we have a lot of similarities., but we’re not quite that good.” Champions of the Atlantic Sun Conference and without any high-major recruits, the Eagles are basking in the moment. They beat up Georgetown in the second half, did the same to the Aztecs on Sunday night. While FGCU will take a step up in class when it tangles with Florida, there is a feeling going into Friday’s South Region Sweet 16 contest against its in-state rival that anything is possible right now. Sophomore point guard Brett Comer is quarterbacking this unlikely trip to Arlington and Cowboys Stadium, having followed his 12-point, 10-assist, six-rebound effort against Georgetown with 10 points and 14 assists against San Diego State. Comer will likely be matched up with Gators senior guard and fellow-Florida native Kenny Boynton in what will be the first NCAA Tournament game between teams from the Sunshine State. “I feel like this shows we’re making a name for ourselves,” Comer said during a quiet moment outside the FGCU locker room on Sunday evening. “We’re out here playing against the biggest teams in the nation, we’ve beaten two of them and hopefully we can beat a third.” Follow Josh Newman on Twitter

When Are the March Madness Games This Week?