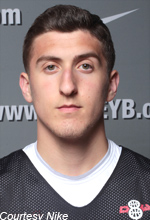 It has been a hectic week for Jaren Sina ever since Northwestern coach Bill Carmody was fired and Sina re-opened his commitment. Sina’s phone has been blowing up with coaches from all across the country trying to reach out. But at this point, the 6-foot-1 senior from Gladstone (N.J.) Gill St. Bernard’s said he’s focusing on three schools — Alabama, Northwestern and Seton Hall — and is in no rush to make a decision. “Pretty much right now I am focusing on these three,” Sina told SNY.tv Monday night. Seton Hall was on Sina’s original short list and they remain in the running after head coach Kevin Willard and assistant Danny McHale visited Sina Sunday morning. “The SHU visit was very good,” Sina said. “I got a chance to talk with Coach Willard about my future and how I’d fit at the Hall. They said they need a player to play alongside Sterling [Gibbs].” Sina has played pickup ball with the Texas transfer in New Jersey before, and the two could theoretically play together in the Pirates’ backcourt. “Yeah, definitely,” Sina said. “He’s a great player and I think the Hall really could have used him this year.” As for Alabama, Sina initially pledged to the SEC school before decommitting in the fall of 2011 and ultimately pledging to Northwestern, but head coach Anthony Grant and his staff also had a home visit Sunday. “The Alabama visit was also very good,” Sina said. “I got a chance to speak with Coach Grant. He emphasized how Alabama is missing a player like me and how I’d bring that missing piece to the program.” Meantime, Northwestern is still in the mix but must first hire a coach. Duke assistant Chris Collins is expected to interview this week following the Blue Devils’ victory over Creighton Sunday night in Philadelphia. Sina said he would wait to see who they hire before making a decision. “From here I’m being patient over the next couple weeks to see who Northwestern hires and to continue to discuss my options with my family,” he said. The Courier News Player of the Year, Sina averaged 21.3 points and 9.1 assists per game and hit 117 3-pointers to lead the Knights to a 19-8 mark.