Kidd, Chandler Rest, But Are Probable for Magic; Wallace, Camby May Return After All-Star Break 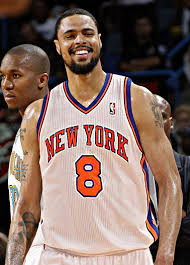 By MATT FALKENBURY Special to ZAGSBLOG GREENBURGH, N.Y. — With six of the next eight games before the All-Star break coming against teams under .500, the Knicks gave a few players a chance to rest and heal at practice on Tuesday. Tyson Chandler (neck) and Jason Kidd (back) did not practice but are considered probable for Wednesday’s game against the Magic. Chandler initially injured his neck against Indiana Jan. 10 Amar’e Stoudemire also did not practice (maintenance day) but should play against Orlando as well. “[Kidd’s] probable, mainly a maintenance day for him, a maintenance day for Amar’e, and Tyson has a little bit of a slight strain, so he is probable as well,” said Knicks Coach Mike Woodson. Rasheed Wallace (stress reaction) and Marcus Camby (plantar fasciitis) also missed practice. Wallace, who has not played in seven weeks, is closer to returning to the court than Camby, but the Knicks don’t want to rush either of them back. “[Wallace] is getting close, how close, I don’t know,” Woodson said. “I don’t know if he or Camby will be back before the All-Star break (Feb. 15-17). If not, we can handle our business up until All-Star break and use that as time to rest and give them a little more time that helps us. “We just continue to take it a day at a time. With both of those guys, we’re not in a hurry to rush them back, because when they come back I want them to be right for the stretch run.” The frontcourt has been injury-plagued almost all season, and now with Chandler dealing with an injury to his neck, getting Camby and Wallace healthy takes on even more importance. The Knicks, coming off a 2-2 week against Brooklyn, Boston, Philadelphia and Atlanta, are getting healthier and will try to take advantage of a soft part in their schedule. With games coming up against Orlando, Sacramento, Detroit, Washington and Toronto, the Knicks — 9-10 in their last 19 games — will try to build up their record even more before the break. “It really doesn’t matter who we play, its just a matter of us getting our confidence in our shots,” said J.R. Smith. Raymond Felton, only two games back from an injury to his pinky, understands the importance of getting everyone involved as the Knicks begin the second half of their season. “You get to the basket, you get to the rim. You get some easy lobs for Tyson or Amar’e or you can get to the basket for a layup or a floater,” said Felton. “You just got to take what the defense gives you and at the same time you got to get those guys the ball.” The Knicks know that getting healthy and taking advantage of the schedule ahead will be key to success down the stretch and into the playoffs. The injuries have taken their toll but the Knicks have survived, still leading the Atlantic Division and with the No. 2 seed in the Eastern Conference. At the end of the day, the Knicks have been cautious in their approach this season with injuries and battling the grind that is the NBA schedule. With the second half of the season just starting, we will see if maintenance days for guys like today will pay off in the long run. Follow Matt on Twitter

James White Will Start as J-Kidd Sits; Woodson Could Coach in All-Star Game