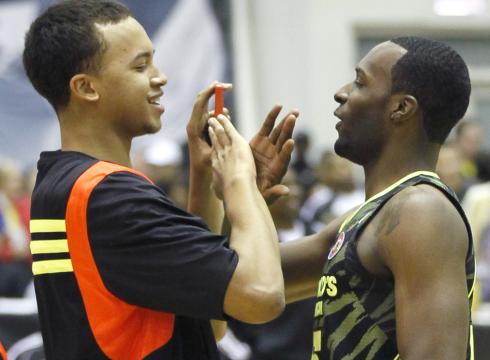 UCLA has cleared freshmen Shabazz Muhammad and former St. Anthony star Kyle Anderson in Gucci-gate. The two freshmen were seen wearing designer Gucci backpacks following UCLA’s 84-73 upset of No. 6 Arizona Thursday night. The Gucci Website shows backpacks that go from $990-$1350. That triggered a report from Pat Forde of Yahoo! Sports, which, in turn, triggered an investigation by UCLA Compliance. “The UCLA Athletics Compliance Office has confirmed that men’s basketball players Shabazz Muhammad and Kyle Anderson received items in question as gifts from their respective families and the matter is closed,” the statement read. Asia Muhammad, Shabazz’s sister and a pro tennis player, took to Twitter to tell Forde that she and her mother bought the backpack as a birthday present. “I have the original receipt if you need to verify that,” she wrote to Forde. “[Shabazz] doesn’t need anything from anyone except his family. … You’re barking up the wrong tree on this one.” Anderson and Muhammad were both cleared last fall of amateurism violations, with Anderson’s news coming in October. The 6-9 Anderson simply Tweeted at Forde, “Everything designer.” Muhammad was cleared in November after missing the first three games of the season, but had to to repay $1,600 in imperissible benefits. The 6-foot-6 wing is projected as a lottery pick in the 2013 NBA Draft. After a 5-3 start imperiled coach Ben Howland, UCLA is 11-1 since and 6-1 in the Pac-12, with that marquee win at Arizona.