Duke, Louisville and Indiana have all spent time as the nation’s No. 1 college basketball team this year and none of them have been able to hold onto it. No. 1 Duke was slaughtered by Miami Thursday night, 90-63, and will be deposed from the No. 1 ranking come Monday. No. 2 Michigan, No. 3 Kansas and No. 4 Syracuse all wait in the wings. The dominant narrative remain the same. There is no clearcut favorite to cut down the nets in Atlanta in April the way there was last year with Kentucky. As many as eight or 10 teams could win the NCAA Championship this year, and perhaps 20 or 25 could make a Final Four. “We’re going to have our peaks and we’re going to have our valleys in this conference,” Louisville coach Rick Pitino said Thursday on the Big East conference call following his team’s back-to-back losses to Syracuse (as No. 1) and Villanova (as No. 5). “Anytime you play in the ACC, Big East, Big Ten, any great conference, you’re going to have peaks and you’re going to have valleys unless you have one of those great basketball teams that dominates a conference which is not the case in college basketball this year.” LAVIN WOULDN’T TRADE RECRUITING CLASS Two years ago, Steve Lavin and St. John’s landed the nation’s No. 3 recruiting class according to ESPN.com. Rutgers coach Mike Rice hauled in the No. 16 class. Two years later and in the wake of St. John’s 72-60 smackdown of the Scarlet Knights Thursday at the RAC, Lavin says he wouldn’t trade his class for a second. “i wouldn’t trade my guys, even during the Georgetown game,” Lavin said, referring to his team’s blowout loss to the Hoyas at MSG. “I really like our personnel. We’re just so young, neophytes, Bambis. I like the upside of those Bambis. I think our future is very bright, whether it’s this year or next year and it looks a little better tonight.”

Included in that 2011 recruiting haul was 6-8 JaKarr Sampson, who went for 21 points and seven rebounds in the Rutgers win and has been named Big East Rookie of the Week four times. Sampson, who eventually came to St. John’s in 2012 following a post-graduate year at Brewster (N.H.) Academy, could be a one-and-done based on potential. It has been easier to sell elite recruits on St. John’s given Lavin’s track record of sending guys to the NBA. Last year, Moe Harkless was the No. 15 overall pick in the draft, and he has enjoyed a solid rookie campaign in the NBA. (Harkless and the Orlando Magic come to New York to visit the Nets Monday and the Knicks Wednesday.) Another St. John’s freshman, 6-9 Chris Obekpa, has also earned Rookie of the Year honors once. Lavin will no doubt use that pitch as he continues to recruit 6-10 Jermaine Lawrence of Pope John, whom he may watch in his season debut tonight, and 6-3 Philly guard Rysheed Jordan. Still, Lavin said he did recruit several of Rutgers’ players, including sophomore guard Myles Mack and redshirt sophomore big man Kadeem Jack. “We loved Myles Mack and recruited him,” Lavin said. “We really liked Kadeem Jack but couldn’t recruit him because we hired Moe Hicks as the Director of Basketball Operations. “They have two players that we recruited…Coach Rice has done a tremendous job of loading this team up with some tremendously capable players.” RICE MAY SHAKE UP LINEUP 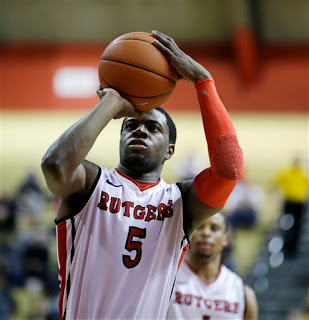 Speaking of Rice, he sounds like he may well shake up his starting lineup and rotation heading into Sunday’s game at UConn. The Knights got thrashed by St. John’s in a game that could’ve put them at 4-3 in the league, and star guard Eli Carter shot 1-of-14 from the field. Rice said he may return Carter — who entered averaging 16.2 points a game — to the bench to spur him on.

“I think our guys are a little too comfortable with the rotation, their minutes, their shot selection,” he said Thursday.

“Sometimes you gotta wake them up and the bench and shot attempts and minutes is one of those ways.”

That said, he wasn’t overly disappointed with Carter’s performance, pointing out that seven of his missed attempts were layups.

For his part, UConn coach Kevin Ollie said he expects Carter to rebound and play well against the Huskies.

“Their players know they need him if they’re going to win and be a great team in this league,” Ollie said of Carter.
“We’re going to see his best game and his best effort, I truly believe that. Hopefully, our guards are up to the challenge.

Speaking of UConn’s guards, Ollie said he expects Shabazz Napier back on Sunday after a shoulder injury suffered in the Louisville game. UConn doesn’t practice today (Thursday) so he’ll get a day to rest it.

“(Napier) definitely needed a couple of days,” Ollie said. “He wasn’t going out and playing the type of basketball we needed him to play. He told me he could go (against Pittsburgh), and that was it. I didn’t want to hear about his shoulder, I just wanted him to perform.

“He hasn’t been able to do full-contact (drills) yet. When we come back (to practice on Friday), I think he’ll be full-blast, the Shabazz of old — getting to the rim, making 3-point shots, being more aggressive and attacking on offense.”

SETON HALL GETS INJURED PLAYERS BACK

Speaking of injuries, Seton Hall coach Kevin Willard was happy to get Brian Oliver (ankle) and Brandon Mobley (shoulder) back for Wednesday’s 55-47 win over USF. They combined for 23 points in the victory.

“Yeah, it really was,” Willard said. “They only practiced one day. They practiced the day before. So for them to have one practice, Brian being almost four weeks and Brandon a week, I was really pleased not only offensively but I thought they brought some great defensive energy to us.

“They brought some good energy to a group that had really been beaten down with all the injuries.”