Melo’s Been Fasting for 15 Days 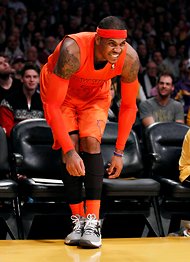 NEW YORK — Carmelo Anthony has been fasting for 15 days and says he has struggled to find energy during that time. “I usually do it to get some clarity in my life and spiritual reasons,” Anthony said after going for 27 points and seven boards as the Knicks snapped a three-game losing streak with a 100-87 win over the New Orleans Hornets. “But I’m done now.” The fast might explain Anthony’s slow starts recently. In his last two games, he’s 2-for-16 with six combined points in two first quarters against Chicago and New Orleans. Of course, he finished with 39 and 27 points, respectively. After trailing for the 11th time in 12 games after the first quarter (29-22), the Knicks turned the tide in the second. In the period, Anthony scored 18 points on 6-of-9 shooting and 5-of-6 from the line as the Knicks outscored the Hornets, 27-12, to seize a 49-41 halftime lead. He had 20 points and six rebounds at the break. “It’s a long story, man,” he said of his fast. “I haven’t had a good meal in about two and a half weeks. No meats, no carbs, anything like that. So I don’t know how I was out there competing at high level. It’s been some games this past week where your body just feels depleted out there and you’re trying to find a way to get some energy. “But I surrender, I’m done. I’m going to get some food right now.” Asked what he’ll have, Anthony said, “I’m going to get me the biggest steak I can possibly get.” As if that dietary news wasn’t enough, Amar’e Stoudemire said he’s been a vegan for three months and feels “great physically.” Stoudemire finished with 12 points in 23 minutes, but coach Mike Woodson said before the game Stoudemire has been cleared to expand his minutes to 25-30 per game. “It’s coming,” Stoudemire told reporters. “I feel great. Again, my main goal is to get better defensively and I have been, and I’ve accepted every challenge that Coach Woodson has brought forth. And I’m willing to accept the challenge he gives me. I’ve been doing that so far. Offensively, that’s going to come. I’ve been a solid offensive player my entire career…As we play more minutes, and get more comfortable out there, the better my game will evolve.” **For Video, Notes & Quotes from my NBA.com notebook on the game, click here.