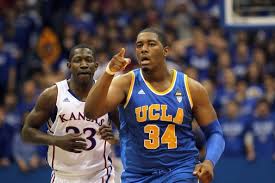 Former UCLA big man Josh Smith is headed to Georgetown. The news was first reported by Jeff Goodman of CBSSports.com. After sitting out a year per NCAA transfer regulations, Smith will be eligible in December 2013. At Georgetown, Smith will play with incoming small forward Reggie Cameron of Hudson (N.J.) Catholic, who was an AAU teammate of Smith’s former UCLA teammate Kyle Anderson on the Playaz Basketball Club. Georgetown’s Jabril Trawick also played with the Playaz. The 6-foot-10, 310-pound Smith has long been considered a talented pro who has battled weight issues. A native of Kent, Washington, Smith entered his junior season with the Bruins averaging 10.4 points, 5.6 rebounds and 19.5 minutes played in 65 career games (24 starts) over his first two years in Westwood. This year, he was down to 5.2 points and 4.2 rebounds per game in 13.5 minutes played. He also considered Kansas.