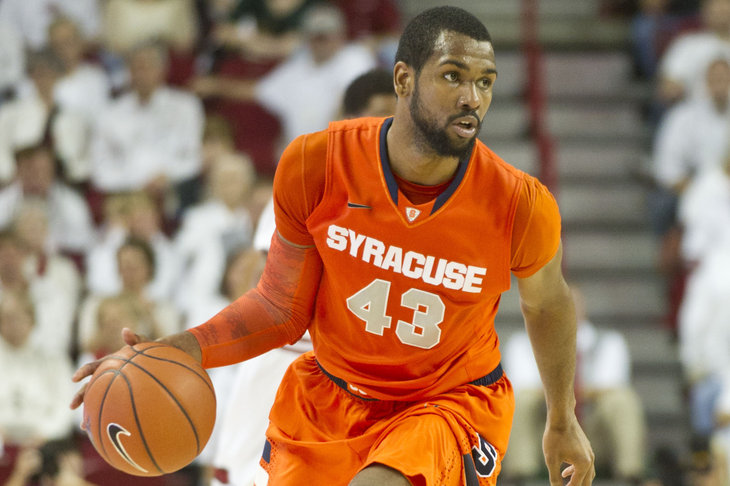 There’s no doubt that these are rough times for the Big East, but the league can hang its hat on the fact that it handily beat the SEC in the Big East/SEC Challenge, 9-3. The only Big East schools to lose in the Challenge were Marquette, Rutgers and Seton Hall. Meantime, the league announced its Player and Rookie of the Week on Monday and, ironically, both are from schools that won’t be in the Big East next season.   BIG EAST Player of the Week JAMES SOUTHERLAND, Syracuse, F, Sr. The Queens, N.Y., native scored a career-high 35 points — the most by a BIG EAST player in a game this season — to lead Syracuse to a 91-82 win at Arkansas as part of the SEC-BIG EAST Challenge. He shot 12-of-17 from the field and 9-of-13 from 3-point range, tying Gerry McNamara’s school record for 3-pointers in a game. Southerland leads the BIG EAST in 3-pointers made (3.6 per game) and is sixth in the conference in scoring at 19.2 ppg. BIG EAST Rookie of the Week JAMES ROBINSON, Pittsburgh, G, Fr. Robinson helped Pittsburgh to a 2-0 week by averaging 11.0 points and 7.0 assists per game while shooting 60.0 percent from the field (9-of-15) and 60.0 percent from 3-point range (3-of-5). He had 11 points with eight assists in a 70-46 win against Howard and added 11 points with six assists in a 74-61 win against Detroit.     BIG EAST Honor Roll CLEVELAND MELVIN, DePaul, F, Jr. Averaged 25.5 points and 8.0 rebounds in a 2-0 week. Scored a career-high 30 points in a win against Fairfield.   ERIC ATKINS, Notre Dame, G, Jr. Averaged 14.5 points, 7.5 assists and 2.5 steals in a 2-0 week. Had 16 points, four assists and three steals in a win against No. 8 Kentucky.   KADEEM BATTS, Providence, F, Jr. Averaged 19.5 points, 7.0 rebounds and 2.0 blocks in a 2-0 week. Had a career-high 32 points in a win against Mississippi State.   D’ANGELO HARRISON, St. John’s, G, So. Averaged 23.5 points and 5.0 rebounds in a 2-0 week. Had 26 points and six rebounds in a win against South Carolina.   ANTHONY COLLINS, USF, G, So. Had 17 points and 10 assists with two steals in a win against Georgia. Has had double-figure assists in three straight games. Photo: Getty Images

Big East Source: 'If bleeding stopped here, the basketball schools would be happy'