By ADAM ZAGORIA and JOSH NEWMAN 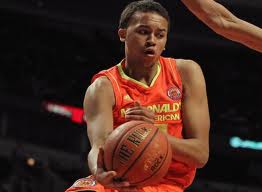 As previously reported by SNY.tv, UCLA freshman guard Kyle Anderson was cleared on Wednesday afternoon by the NCAA and can begin play with the Bruins, who open Nov. 9 with Indiana State in Westwood.

“UCLA was informed by the NCAA earlier today that freshman guard Kyle Anderson is eligible to play this season, and that the NCAA has found no evidence to substantiate claims of violations in his case. I am grateful to all those who were involved in the process. We are looking forward to opening our season on November 9 against Indiana State at New Pauley Pavilion.”

Before Guerrero’s statement, Kyle Anderson Sr. confirmed his son’s status to SNY.tv with a text message that read, ‘He has been cleared!’

With Anderson now ready to go, UCLA now awaits final word on the eligibility of fellow-freshman sensation Shabazz Muhammad. Anderson, Muhammad and the No. 13 Bruins are scheduled to play in the Legends Classic at Brooklyn’s Barclays Center Nov. 19-20.

UCLA will open play on Nov. 19 against Georgetown and will play either Indiana or Georgia on Nov. 20. Led by Preseason All-America forward Cody Zeller, the Hoosiers are ranked No. 1 in the Associated Press and USA Today Coaches Polls.

Anderson, a 6-foot-9 point guard out of Jersey City’s St. Anthony High School, arrived at UCLA after a decorated high school career. He went 93-1 over his final three seasons, including 65-0 with back-to-back NJSIAA Tournament of Champions crowns in his final two seasons with the Friars. He began his career at now-closed New Jersey heavyweight Paterson Catholic.

“He’s the most complete player to ever play at the school,” longtime St. Anthony head coach and Naismith Hall of Famer Bob Hurley said the night of the 2012 TOC final. “In a time when we’ve had some really good ones, his overall game and just what he’s done over these last two years is remarkable.”