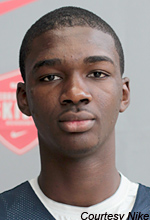 Noah Vonleh remains one of the most sought after players on the board in the Class of 2013 and the New Hampton (N.H.) forward has shuffled his visits somewhat because of his busy schedule. The 6-foot-9 Vonleh will not make his visit to Syracuse this weekend as originally scheduled, but will still make the trip to Indiana Nov. 9-11, New Hampton coach Pete Hutchins confirmed Tuesday to SNY.tv. Indiana just landed a commitment from Oak Hill (Va.) small forward Troy Williams and remains in the hunt for both Vonleh and DeMatha Catholic big man Beejay Anya, who told SNY.tv Monday he is down to the Hoosiers and N.C. State. Vonleh will also visit Ohio State the weekend after Thanksgiving (Nov. 30-Dec.2). Vonleh is also considering Syracuse, Georgetown, UConn and North Carolina and Hutchins said they are “working on” visits to the aforementioned Big East schools. “It’s difficult with his New Hampton basketball schedule,” the coach said. Hutchins said they are also “planning an unofficial to North Carolina” sometime between Dec. 27-29 while the team is in Raleigh (N.C.) for a tournament.

Opening Night Rosters for Every Team in the NBA