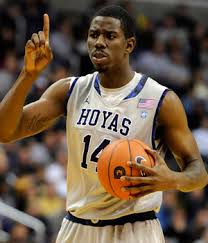 GREENBURGH, N.Y. — Henry Sims has started as many preseason games for the Knicks as Amar’e Stoudemire has. He has actually started more preseason games than J.R. Smith, Marcus Camby and Rasheed Wallace combined. On Saturday, when the Knicks played the Celtics in Albany, the 6-foot-10 former Georgetown standout found himself starting for the Knicks alongside Raymond Felton and Kurt Thomas, among others. “It felt great,” Sims told SNY.tv Tuesday after practice. “My mom got to watch the game [on TV] so she was excited, more excited than I was.” Sims acquitted himself well in the game, going 3-for-5 for nine points with three rebounds in almost 18 minutes. “It’s a fun process, you know,” he said. “You get to play with a lot of people I watched growing up — Melo, Jason Kidd, Kurt Thomas, even Tyson [Chandler]. It’s a fun process and it’s just exciting to get out there and play.” Sims played four years for John Thompson III at Georgetown, turning himself into a key cog who averaged 11.6 points and six rebounds last season. He went undrafted — as did his Georgetown teammates Jason Clark and Hollis Thompson — but played for the Utah Jazz in the Orlando Summer League and the Chicago Bulls in the Vegas Summer League. The Knicks signed him to the training camp roster and he’s trying to make the most of his opportunity. Sims was the last man off the practice court on Tuesday and has helped add depth to a frontcourt depleted by injuries to Stoudemire (knee), Camby (calf) and Wallace (conditioning). “We got a lot of bodies, a lot of big guys,” Chandler said. “I think that’s going to be our strength this year, is our depth.” For his part, Sims is keeping his head down and just hoping to make the final roster. “I feel like my chances are pretty good,” he said. “I’m coming out here giving my all every day. I make mistakes but you know, it’s a rookie, so you’re supposed to. It’s still unacceptable on my end but I feel like my chances are pretty good.”

Rasheed Wallace Could Scrimmage For First Time on Friday; Brewer Getting Back Into the Swing