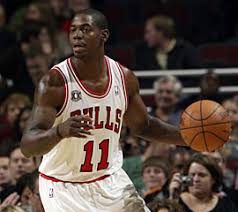 GREENBURGH, N.Y. — The Knicks could get one of their walking wounded back this week in shooting guard Ronnie Brewer, but Marcus Camby and Rasheed Wallace have still not been cleared to play. Brewer is out with a left medial meniscus injury but could return to practice this week. “Possibly this week, that’s a possibility,” head coach Mike Woodson said Tuesday. “If that can happen, that’s a major plus for us.” The Knicks play three preseason games in four days beginning Friday against the Toronto Raptors in Montreal. After that they meet the Celtics in Albany Saturday, followed by a date with the 76ers in Syracuse Monday. Woodson said there is a chance Brewer could play in one or more of those games. “I don’t know,” Woodson said. “If he comes back [Wednesday] we gotta give him a couple days just to see what his legs and his knee feels like. I’m not gonna just throw him out there. He’s gotta show me out here that he can withstand some of the running and banging around.” In his absence, the Knicks have started Mychel Thompson and James White at the two in two preseason games. “I think [Brewer] can defend,” Woodson said. “That’s one of the reasons why we brought him here and he knows how to play. He’s just a basketball player.” As for Camby (left calf), 39, and Wallace (conditioning), 38, neither has been cleared. Wallace continues to do his own workout routine on the side court, and spent part of last week boxing. Asked if  Wallace could scrimmage, Woodson said, “Not scrimmage. He gotta get ready for practice first and then we’ll talk about scrimmaging.” He added: “When the training staff comes to me and says that they think he’s conditioned enough to run up and down and play, then we’ll evaluate him more.” Wallace came out of retirement to re-join Woodson, with whom he won an NBA title in 2004 with the Pistons. “He looks good,” Woodson said with a smile. “He looks real good.” Woodson said he hoped to have all of the injured and unconditioned players ready to go next week. “I’m hoping by next week that I got everybody in place and we can really start executing offensively an defensively and then eventually I”ll start adding some more things offensively as we along,” he said.