Iverson, a Connecticut native, had also previously considered UConn and Florida, among others.

“He chose Memphis because he felt comfortable with them,” Fishburne coach Ed Huckaby told SNY.tv. “It was his decision and his decision alone. He felt they had a sincere intesest in him as a whole person.”

“Memphis, they’re a good school, too,” Iverson told SNY.tv last month. “They might be a choice.”

‘Sheed Works Out for Knicks, Baron Hired for ‘Multi-Faceted’ Role 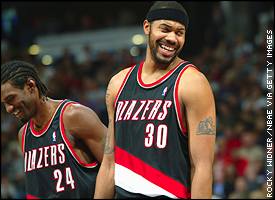 The Knicks got a lot older this offseason, but that may not stop them from getting older still before or during training camp.

At the age of 38 and out of the league for the last two seasons, four-time NBA All-Star Rasheed Wallace worked out with the Knicks on Saturday at the MSG Training Center in Greensburgh, N.Y. While no deal is imminent at this point, Wallace is the one showing interest as has he declined offers from several teams this offseason.

“I have not had any official conversation with the Knicks organization,” Wallace’s agent, Bill Strickland, told the New York Times. “If something happens, I will be more of a facilitator rather than an advisor. This decision is totally up to him as to what he will or will not do.”

The news of Wallace working out in Greenburgh was first reported by ESPN’s Ric Bucher.

Back From Oregon, Gordon Heads to UW Next

Aaron Gordon is back from his weekend official visit to Oregon and will head to Washington this coming weekend.

“[He said] he enjoyed it,” Tim Kennedy, head coach at San Jose (Calif.) Archbishop Mitty told SNY.tv Monday. “He was really impressed with the facilities and [said] they take care of their guys over there.”

Gordon knows Oregon point guard Dominic Artis from their time together on the Oakland Soldiers.

“So they have kind of a good connection,” Kennedy said.

Noah Vonleh has reclassified to 2013 from 2014 and several top schools are in hot pursuit.

The news was first reported by ESPN.com.

“He’s a good student,” New Hampton coach Pete Hutchins told InsidetheHall.com. “There were minimal changes that needed to be made to his course load. We just kind of made an easy decision in that he’s certainly talented enough. I think academically, it just made it that much easier to make that decision.”

The Ducks also landed twins Tyrell and Tyree Robinson, who reportedly will play both basketball and football at the school.

Crean Knows Hoosiers Must Live Up to Expectations

No, these Hoosiers aren’t anybody’s underdogs and Crean knows it.

The 2012-13 Indiana basketball team will enter this season with much hype and hoopla surrounding them, and Crean can see, hear and feel the expectations as he walks around Bloomington.

Aaron Harrison Sr. disputes a published report by Scout.com that Andrew and Aaron will visit Kentucky for Big Blue Madness Oct. 12 instead of attending Maryland’s Midnight Madness as originally planned.

According to a Tweet from Steve Jones of the Courier Journal: “Aaron Harrison Sr. said the family has not discussed taking a visit to Kentucky’s Big Blue Madness and has no trips planned to any school.”

Ben Roberts of NextCats also Tweeted: “We haven’t made a decision on anything. We haven’t talked about madness.”

The news of the Kentucky visit was first reported by Josh Gershon of Scout.com, who said Aaron Harrison told him they would visit Kentucky.