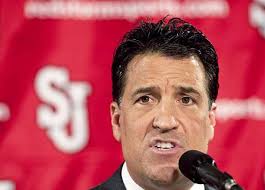 NEW YORK — After nearly a year away from coaching while he battled and overcame prostate cancer, St. John’s coach Steve Lavin is anxious to get back to work. “I feel good and the doctors are pleased with the progress that I’ve made,” Lavin said Saturday at the Dribble for the Cure charity event at St. John’s. “The bloodwork has come back clean and I’m cancer free.” It has been almost a year since Lavin underwent successful prostate cancer surgery Oct. 6. He then tried to rush back to the sidelines, only to find himself physically spent and unable to live up to his expectations. He coached a handful of games in fits and starts before handing the reigns over to Mike Dunlap, now the Charlotte Bobcats head coach. But as SNY.tv pointed out last year, Lavin’s time away from coaching turned into an advantage in terms of recruiting. While Dunlap coached the games, Lavin was able to recruit a strong class, highlighted by 6-8 forward JaKarr Sampson, to help compensate for the loss of Maurice Harkless, now with the Orlando Magic. “It turned out in some ways to really be to our advantage that we were able to bring in the class last year because of the time I had to focus on recruiting,” Lavin said. “And then during the summer, because we had a full complement of players, I didn’t have to be on the road. I could just drop in with this group of 13 players and start to build toward the beginning of our season.” The Johnnies return just five players from last year’s 13-19 team, and Lavin said the team has been picked anywhere from 10th to 14th in the 15-team Big East. Still, after playing with just six scholarship players at times last year, St. John’s finally has a full roster, albeit a very young one. “Clearly, they’re young, we’re neophytes, we’re beginners,” Lavin said. “But the personnel is at a place where we can be on more equal footing with our competition.” Lavin said that depending on the day, different players stand out. “It’s someone different every day that jumps out, from Felix Balamou today was one of the stand-out players,” Lavin said. “Chris Obekpa on a a number of occasions has stood out. Naturally, JaKarr Sampson. But Marco Bourgault has shot the ball lights out from long distance. Orlando [Sanchez] has been as dominant as any of the first-year players. Christian Jones I think is the sleeper of the class. He’s kind of an X-factor just because of his physicality and his nimble feet and strong hands. Just a bruising style of play around the basket area, but also quick enough to catch a ball on the perimeter and make good decisions.” D’Angelo Harrison, a natural shooting guard, will run the point at least until Texas A&M transfer Jamal Branch takes over the point duties when he becomes eligible in December. “I think Jamal has the opportunity to be a stabilizing force with so many younger players even though he’s only a sophomore,” Lavin said. “He understand what needs to be done. “Right now, D’Angelo’s our point guard and in the offseason, both the time with John Lucas in Houston during the summer as well as now [new assistant coach] Darrick Martin, who’s going to naturally take him under his wing and provide some tutelage. So he’s made quantum leaps in understanding leadership on the floor, running our basketball team as the point guard and how to get other players involved.” Lavin added: “D’Angelo is going to get significant minutes regardless of what combination of players and when players become eligible just because so many good things happen when he has the ball in his hands. And one way of guaranteeing that he get touches offensively is to get him the ball off the rebounds and off change of possession and off inbounds. We want him to get touches…because he sees the floor well, he’s got great velocity on his passes, he can shoot from range so it stretches defenses, which opens things up underneath.” Harrison, for one, said he’s excited for the transition to the point and excited to have Lavin back. “It’s amazing,” he said, pointing to Lavin surrounded by a scrum of reporters. “You just look. He has all the pub around him, he has the buzz. It’s just good energy around here.” FREE THROWS 2013 point guard Rysheed Jordan is currently on campus for an official visit. St. John’s is also focusing on forwards Jarell Martin, Jermaine Lawrence and Ish Wainright.

Davon Reed to Miami, Wants to Bring Friends With Him