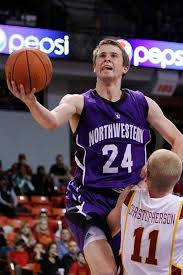 John Shurna, a 6-foot-9, 222-pound shooter who is Northwestern’s all-time leading scorer, has signed a one-year partially guaranteed deal with the Knicks, his agent, Mark Bartelstein, told SNY.tv. Shurna averaged 20 points and 5.4 rebounds last season at Northwestern, shooting 44 percent from beyond the arc. He could play a role similar to Steve Novak, the 3-point ace who re-signed with the Knicks in the offseason. “Tremendous shooter/scorer,” Bartelstein said. “He’s Northwestern’s all-time leading scorer. He’s very athletic.”