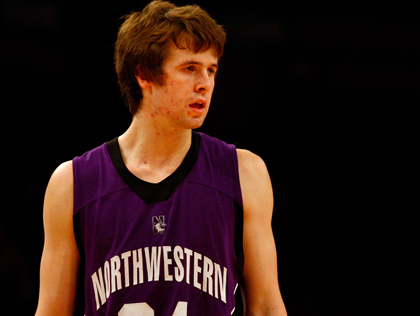 As the Knicks head towards the beginning of training camp Oct. 2 in Greenburgh, N.Y., they officially made a few tweaks to the roster on Tuesday afternoon. The team announced on Tuesday that it has signed forwards John Shurna and Mychel Thompson, point guard Oscar Bellfield and center Henry Sims. Shurna’s agent, Mark Bartelstein, confirmed to SNY.tv on Monday evening that his client had come to terms with the Knicks on a one-year, partially guaranteed, which basically amounts to a training camp invite. While terms of the contracts were not disclosed, per team policy, the deals for Thompson, Bellfield and Sims likely amount to training camp invites as well. These four signings give the Knicks 19 players under contract, both guaranteed and non-guaranteed, going into training camp. Bellfield and Sims conducted workouts with the Knicks leading up to June’s NBA Draft, With the 48th overall pick, the Knicks wound up selecting Greece’s Kostas Papanikolaou, whose draft rights have since been traded to the Portland Trail Blazers as part of the Raymond Felton trade. Thompson played with the Knicks’ Summer League team in Las Vegas this summer. He spent his rookie season with the D-League’s Erie BayHawks and the Cleveland Cavaliers, where he played in five games with three starts to his credit. While all four players appear to be long shots to make the Knicks’ roster out of training camp, Shurna is arguably is the most intriguing prospect out of the group. At 6-foot-9, 220 pounds, Shurna led the Big 10 in scoring as a senior last winter at 20.0 points per game while shooting a gaudy 44 percent from 3-point range. He left Northwestern as the program’s all-time leading scorer with 2,038 points. With his size and skill set, he has been compared to Knicks sharpshooter Steve Novak. “Tremendous shooter/scorer,” Bartelstein told SNY.tv of Shurna on Monday evening. “He’s Northwestern’s all-time leading scorer. He’s very athletic.” Follow Josh Newman on Twitter