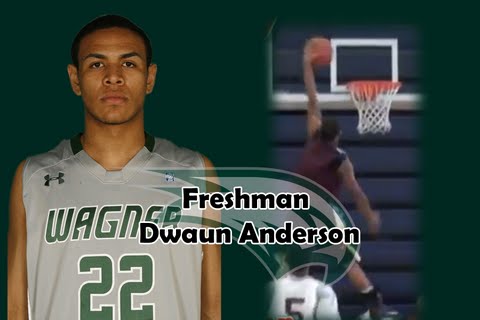 The good news for first-year Wagner College head coach Bashir Mason is he has four starters and nine letter winners returning from last season’s 25-win outfit. The better news for Mason is that on Friday afternoon, his Seahawks got a lot more dangerous. Wagner announced on Friday afternoon that Dwaun Anderson, Mr. Basketball in the state of Michigan as a senior in 2011, has received a waiver from the NCAA and will be eligible to play beginning this semester. He will have four full years of eligibility remaining after transferring from Michigan State. Anderson spent the 2011 summer session in East Lansing, transferred to Wagner in January of 2012 and and has yet to play a college basketball game. “It’s obviously great news for us,” Mason said in a statement. “With Dwaun available it means we can begin establishing our identity as team as soon as practice begins.” The 6-foot-4 guard averaged 20.1 points, 10.0 rebounds, 4.5 assists, 3.3 steals and 1.9 blocks per game for Suttons Bay High School. Rivals had the three-time All-State selection ranked as the No. 95 player and No. 25 shooting guard in the Class of 2011. With Anderson in the fold along with returning starters Kenny Ortiz, Latif Rivers, Jonathan Williams and Naofall Folahan, the Seahawks appear to be the biggest threat to two-time defending NEC Tournament champion Long Island University. “He’s a really high level athlete,” Mason said. “Dwaun is capable of doing the kind of things you see in NBA films, and now we won’t have to deal with two different teams this season, one with him and one without him.” Under former head coach Dan Hurley, who has since left to take the head coaching job at the University of Rhode Island, Wagner went 25-6 last season, which included a win at then-No. 15 Pitt. The Seahawks fell to Robert Morris, 71-64, the NEC Tournament semifinals. Photo: Wagner Athletics Follow Josh Newman on Twitter