Jabari Parker May Not Commit Until Spring | Zagsblog
Follow @adamzagoria

Jabari Parker May Not Commit Until Spring 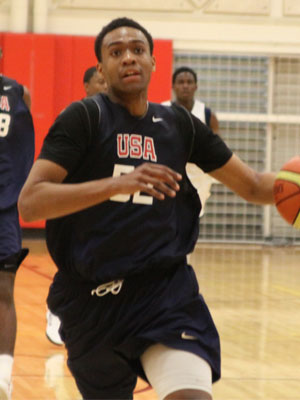 It appeared Jabari Parker, the consensus No. 1 player in the Class of 2013, was set to make his college decision in November and have it out of the way before his senior season at Chicago’s Simeon Career Academy. As of Thursday, it appears those plans could change. Sonny Parker, Jabari’s father, told ESPN Chicago that his son may wait to sign with a school until the spring if he cannot decide by the early signing period, which runs from Nov. 14-21. The younger Parker told SNY.tv back in June that he would look to make his decision in November. “I’m on a setback not making as much progress as I should be [cutting his list], but I’m looking to make my choice in November,” Parker said back in June. “I want to do it for me because I want to get it over with before the season starts.” On Thursday, Parker’s dad left the door open for a spring decision. “We aren’t in a hurry,” Sonny Parker told ESPN Chicago. “He can pretty much go anywhere he wants to go and can take his time. We’re in a good position to take his time and get it right the first time. We’d like to get it over with, but there’s no rush. Like I told him, if you aren’t ready, do it in the spring. If they want you bad enough, they’ll wait. He’s the No. 1 player.” Parker recently cut his list to 10 schools including BYU, DePaul, Duke, Florida, Georgetown, Kansas, Kentucky, Michigan State, North Carolina and Stanford. Sonny Parker expects his son to trim his list some more before taking any visits, but if you ask Roy Schmidt, three schools stand out above the rest. Schmidt, the editor/publisher of Illinois Prep Bulls-Eye, has known Sonny Parker for 15 years and Jabari for six. In his eyes, it’s Michigan State, Duke, Kentucky and everyone else. “I do think that Kansas and DePaul have the most shots, but are not favorites in comparison with Michigan State, Duke and Kentucky,” Schmidt told SNY.tv at the Peach Jam last month.  “I think those are the three favorites.” Parker, the reigning Mr. Basketball in the state of Illinois and last season’s Gatorade National Player of the Year, has been on the shelf since mid-July with a fractured right foot. Surgery was not required. Photo: USA Basketball Follow Josh Newman on Twitter

Offers Adding Up for Kamall Richards