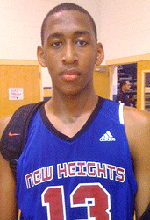 Jalen Jenkins, a versatile 6-foot-7 small forward from Cardinal Hayes and the New Heights AAU program, has verbally committed to George Mason for 2012 but may spend a year in prep school. “They recruited me heavily and showed me a tremendous amount of love,” Jenkins told SNY.tv. “Their campus is beautiful and I already know a player there.” Former Christ the King guard Corey Edwards was a freshman at George Mason last season. Jenkins said George Mason coach Paul Hewitt stuck with him throughout the recruiting process and that’s why he chose them over Iona, Fordham, Manhattan, Quinnipiac and other suitors. “The head coach was the first to call me and that means a lot to me because at the end of the day they are the ones that call the shots and Coach Hewitt has a plan for me,” Jenkins said. “It’s a place where I would be able to work hard while getting minutes as my basketball career continues.” New Heights coach Adam Berkowitz said George Mason is getting someone with a strong upside. “Jalen is an example of good things happening to good people,” he said. “He has always been humble and hard working and that has paid off. He’s a 6-7 wing who can handle the ball and is a terrific passer. His potential is unlimited.” Photo: Rivals