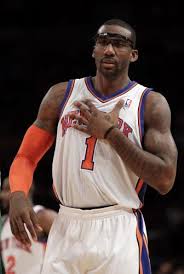 GREENBURGH, N.Y. – Because he was the first member of the Knicks’ Big Three to come aboard in the Summer of 2010, because he is arguably the biggest free agent acquisition in the history of the franchise and because he is partially charged with the responsibility of bringing the team back to prominence after a decade of darkness, Amar’e Stoudemire is under considerable pressure.

The simple task of performing and performing well on the NBA’s biggest stage and under the brightest lights is enough for most players, but this has not been a typical season for anyone in the league thanks to the truncated 66-game regular season. The rarity of this season applies especially to Stoudemire.

“It was a crazy year man. All this is going to go down as an asterisk beside this

Bradley “B.J.” Hayes has set a visit to Georgetown for next weekend and has postponed his UConn visit, his father told SNY.tv Friday.

“He is going to Georgetown,” Brad Hayes said by phone. “He’s going May 4th and 5th and coming back on the 6th.”

Georgetown recently missed out on 6-10 Nerlens Noel when he chose Kentucky over the Hoyas and Syracuse and the addition of the raw, but talented Hayes would be a nice addition in the late signing period.

Josiah Turner won’t be at St. John’s this weekend while he finishes up final exams, but the former Arizona point guard may visit next weekend or down the line.

The 6-foot-9 Raffington, born in Germany, averaged 2.1 points and 2.2 rebounds in 7.8 minutes last season as a sophomore at San Francisco. He is one of six players transferring out of coach Rex Walters’ program. The professional life of a Division 1 basketball assistant is often tenuous, uncertain and fraught with instability.

Perhaps no one can attest to this more than Scott Adubato, who has been fired three times in three years at three different schools.

Adubato was an assistant under Bobby Gonzalez at Seton Hall before that staff’s tumultuous existence came to an end in 2010.

The next year he caught on with Barry “Slice” Rohrssen at Manhattan, only to be fired again in 2011.

And then after brief stints coaching with the Playaz Basketball Club AAU program and with the Chinese League team where Knicks shooting guard J.R. Smith played, Adubato returned to the U.S. to join Isiah Thomas’ staff at Florida International, only to be fired yet again earlier this month.

Scott Machado of Iona was named winner Thursday of the 79th Haggerty Award as the 2011-12 All-Met Division I men’s college basketball player of the year.

Machado averaged 13.6 points and a national-best 9.9 assists for a Gaels team that reached the NCAA tournament.

Former Wagner coach Dan Hurley, who led the Seahawks to a 25-6 record in his second year, and Steve Masiello of Manhattan, who went 21-13 in his first year, were named co-coaches of the year.

Moe Harkless of St. John’s, who declared for the NBA Draft, was named Rookie of the Year.