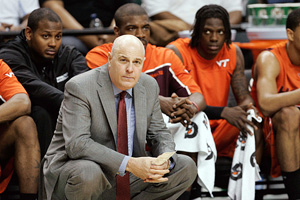 Virginia Tech on Monday fired head coach Seth Greenberg after nine seasons and in part because he had lost six assistants in the last four years. “I want to thank Coach Greenberg for his dedication and effort in leading Virginia Tech in the early years of ACC membership,” Virginia Tech Director of Athletics Jim Weaver said. Greenberg’s contract was bought out for $1.2 million. “I was completely shocked and blindsided by the decision of Jim Weaver and the administration,” the Long Island native told ESPN.com. “These past nine years have been some of the most rewarding for me both personally and professionally … I appreciate the support from [Virginia Tech] president [Charles W.] Steger, the Hokie Nation, the student body, my coaching staff and all our players. Our program was built on family, trust and relationships. I leave the program in far greater shape than when I was hired nine years ago.” Greenberg has a career record of 383-293 in 22 seasons as a collegiate head coach and a 170-123 record in nine seasons at Virginia Tech. His only NCAA appearance came in 2007. The Hokies went 16-17 overall, 4-12 in the ACC this past season. Photo: US Presswire