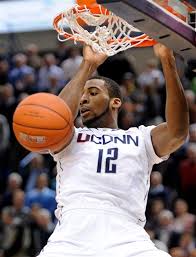 LOUISVILLE,  Ky. –– A year ago, Andre Drummond’s current and future schools both won championships. The 6-foot-10 Drummond was the MVP as St. Thomas More of Oakdale, Conn., won the National Prep championship in New Haven. Drummond also watched as the home-state Huskies — the school he surprisingly enrolled in last August — made a dramatic run through the Big East and NCAA championships. “I watched them at my house,” Drummond told SNY.tv Wednesday inside the UConn locker room here. “I was going through my own tournament as well because I won a national championship in high school, so it was just great watching them win the whole thing.” 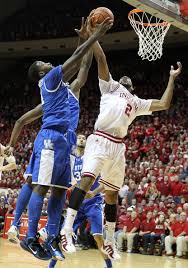 A year ago, Michael Kidd-Gilchrist’s current and future schools both lost championships. The 6-7 Gilchrist starred alongside teammate Derrick Gordon at Elizabeth (N.J.) St. Patrick, which lost the mythical national high school championship game to St. Anthony. After winning the East Regional in nearby Newark, Gilchrist’s future team, Kentucky, fell to UConn in the national semifinals in Houston. “Just that last game, it was just crazy,” Gilchrist told the Louisville Courier-Journal of the St. Anthony game. “But I love St. Patrick’s High School. I love it.” Now, one year later, Drummond and Kidd-Gilchrist are part of a group of super-talented freshmen here in Lousville and the two could meet in the third round on Saturday. That group includes Drummond’s teammate Jeremy Lamb and Kentucky’s Anthony Davis and Marquis Teague. Four of those players are projected by the Website DraftExpress to go within the first 12 picks of this year’s NBA Draft: Davis at No. 1, Kidd-Gilchrist at No. 2, Drummond at No. 4 and Lamb at No. 12. Kentucky sophomore Terrence Jones is projected to go at No. 11. “There are a lot of good players there,” one veteran NBA scout who planned to come to the games here told SNY.tv. Both Drummond and Kidd-Gilchrist have said they will return to campus next year, but who knows what that means at this point. “Oh, (shoot),” Kidd-Gilchrist told the Courier-Journal. “I ain’t going nowhere. I ain’t going nowhere.” Drummond told SNY.tv earlier this year he planned to return, but UConn if misses the 2013 NCAA Tournament because of APR violations, he might opt to reconsider. For now, both players are hoping to help their teams make the Final Four in New Orleans next month. To do so, Kidd-Gilchrist must first get past Western Kentucky and Gordon, his friend and former teammate who suffered that heart-breaking loss to Kyle Anderson and St. Anthony a year ago. “I really can’t wait to play my best friend,” Kidd-Gilchrist said. “We always talked about it, all of last year. I really can’t wait. He’s like my brother, that’s it. I’d do anything for him.” Said Gordon: “I was just talking to him; we talk a whole bunch going back and forth. But when the ball goes into the air, it’s time to go to work.” While Kentucky may carry the burden of being the favorite to win it all, Kidd-Gilchrist says he doesn’t feel that way. “No, I’m still a kid,” he told the Courier-Journal. “Nah. I’m just trying to have fun and just play my heart out. That’s it, and it’s going to fall into place.” UConn, meantime, is playing with house money. A year after winning it all, they are a No. 9 seed playing No. 8 Iowa State. “We’re starting over,” UConn coach Jim Calhoun said, “fresh chance, and we have an opportunity. We earned that opportunity.” Drummond has an opportunity, too, but he must also help defend 6-8 Iowa State star Royce White, who enters averaging 13.1 points and 9.2 rebounds. But Drummond thinks he’ll be a matchup problem for White. “I feel like it creates matchup problems for Iowa State,” he said. “We have [Alex] Oriakhi and myself in the post and they don’t have any bigs above 6-9. Me and Alex are going to do our thing.” One year after winning his own national title at St. Thomas More, Drummond is anxious to help himself — and his current school — to another one. “Oh, definitely,” he said. “Being here now, one of my goals is just help out and get there again.”