Knicks In Pursuit of J.R. Smith 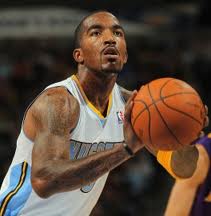 Knicks coach Mike D’Antoni said the team would be “aggressive” in pursuing a 3-point shooter, which could mean former St. Benedict’s Prep guard J.R. Smith. Smith has been teasing Knicks fans via Twitter from China, where he dropped 60 points in a league game Wednesday. “New York City  is where it’s at,” Smith Tweeted. He added that former Denver Nuggets teammate Carmelo Anthony was “family” and called himself a “loyal dude” in reference to his roots in New Jersey. “I know that  [interim GM] Glen [Grunwald] , everyday will canvas the league and talk and try and make the team better whether it’s through the D-League, whether it’s through free agency, whether it’s through trades,” D’Antoni said. “Whatever makes sense and helps our team, we’re gonna do it.” Smith cannot return to the NBA until his Chinese season is over, which could be later this month or early March. As first reported by ZAGSBLOG, Smith is mulling five teams — the Knicks, Clippers, Lakers, Thunder and Bulls. “We know the areas that we need help,” D’Antoni said. “We’re looking hard. .”

Boeheim Says He Has No Plans to Retire Soon