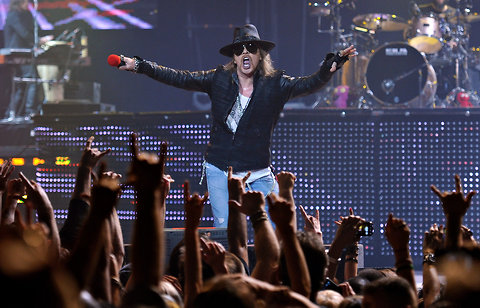 Guns N’ Roses is back. OK, so it’s not the original lineup, but Axl Rose will still be leading the charge when the Gunners play three concerts at small clubs in New York City next month. Original members Duff McKagan, Izzy Stradlin, Slash, Dizzy Reed and Matt Sorum are no longer in the band which will be inducted into the Rock and Roll Hall of Fame in April. The Gunners will open a six-date tour at the Roseland Ballroom Feb. 10, followed by a show at Terminal 5 Feb. 12, and a stay at Webster Hall Feb. 15. Axl and company will also play two shows at the House of Blues clubs in Chicago (Feb. 19) and Atlantic City (Feb. 23), and one at the Fillmore in Silver Spring, Md. (Feb. 23). Photo: Getty Images

Adele Under The Covers