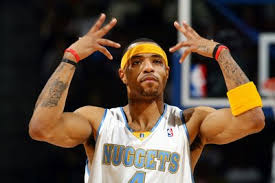 Kenyon Martin will decide his new destination “next week or so,” his agent, Andy Miller, confirmed Friday to SNY.tv. Chris Broussard of ESPN The Magazine reported Friday that Martin is considering the Knicks, Miami Heat, Los Angeles Clippers, San Antonio Spurs and Atlanta Hawks, Martin, who helped the Nets reach two NBA Finals, cannot join an NBA team until his former Chinese team, the Xinjiang Guanghui Flying Tigers, finishes their season Feb. 16. The struggling Knicks already have Amar’e Stoudemire, Tyson Chandler and Carmelo Anthony up front, but Anthony and Martin are close, having played together for more than six years with the Denver Nuggets. The Knicks and the Clippers can offer the $2.5 million mini mid-level exception. Martin played 48 games with the Nuggets last season, averaging career-lows of 8.6 points 6.2 rebounds.