Does UNLV Have a Shot at Shabazz Muhammad? | Zagsblog
Follow @adamzagoria

Does UNLV Have a Shot at Shabazz Muhammad?

Does hometown UNLV have a real shot at landing Shabazz Muhammad? If you listen to what his Bishop Gorman teammate, Demetris Morant, told FiveStarBasketball.com, the answer is yes. “I think Shabazz is really considering going [there] because he feels that they’re a great team and everyone else sees that, too,” the UNLV-bound Morant, a 6-foot-8 power forward, told Five Star in the above video. “And they’re ranked in the nation. “At first he wasn’t thinking about going there because he thought they wouldn’t be that good and he wouldn’t be looked at by [NBA] scouts. So he was mostly considering Kentucky, but now UNLV is in the top three.” Muhammad is looking at UNLV, UCLA, Arizona, Duke, Kentucky and Kansas, but he is intrigued by the Rebels, especially after they added Pitt transfer Khem Birch, a former McDonald’s All-American. “Their program is really coming along,” the 6-foot-6 Muhammad said of UNLV. “I mean, they got Khem Birch, got some other recruits. Coach [Dave] Rice is doing a really good job. They’re a really good team, I’m really looking at them closely…They’re going to be a great team.” Muhammad already lives in Vegas and said he enjoys the climate. “I love Vegas. Besides the heat it’s a great place to live in,” he said. “A lot of city lights…I’ve been there pretty much all my life. I love Vegas.” Muhammad has three officials remaining and plans to visit Duke March 1 for the North Carolina game. He said “UCLA and UNLV probably won’t [get officials] because they’re so close to me.” Kentucky remains a top option. Wildcats coach John Calipari and Duke coach Mike Krzyzewski watched Monday when Muhammad dropped 37 points as Bishop Gorman beat DeMatha Catholic, 73-65, at the Hoophall Classic. “The interest level in Kentucky is high,” he said. “Coach Cal was there today [at the Hoophall]. I talked to him a week ago. Their style of play, I just think I fit really well in their style of play and they’re just a great program.” Duke and Arizona have also drawn his attention. “Coach K is great,” Muhammad said. “He’s just a mastermind on offense. He lets his guards go, which is a great thing for me. And I’m really excited to going down there.” Arizona’s loaded recruiting class has also made an impression. “Their freshman class is probably No. 1 in the country right now,” he said. “Gabe [York], Grant Jerrett, I talked to those guys. I think I could fit in really well there. They also a high-tempo style of play, which is great and fits me a lot. So I’m really looking at them also” Muhammad plans to take his officials before making any decisions. “I have three more officials,” he said. “Don’t know where I’m going to go yet. So I’m definitely going to take those and go from there.” 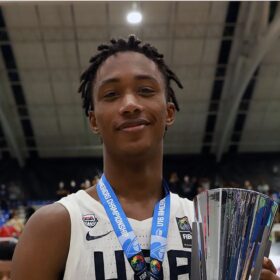