Cuse Now Drawing Attention For All The Right Reasons 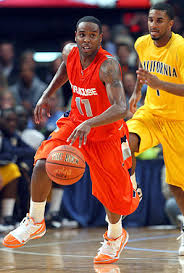 During the early part of this college basketball season, whenever we heard or read about Syracuse on “SportsCenter” and in the newspapers, it was for all the wrong reasons. “We’re just taking it as disrespecting [us] that we’ve been a Top 5 team and every time you hear ‘Syracuse’ it’s about the [Bernie Fine] scandal,” Orange point guard Scoop Jardine told SNY.tv last month. “No disrespect to what’s going on because it’s serious.” Now, when the No. 1 Orange make headlines it’s for all the right reasons. After Wednesday’s win over Villanova, Syracuse is 18-0 for the second straight season and there’s no telling how far this team can go. Final Four? National Championship? Nothing is out of the question. “I haven’t watched Syracuse yet, for obvious reasons,” West Virginia coach Bob Huggins cracked on Thursday’s Big East conference call. “I have a hard enough time sleeping as it is.” After it dominated the headlines for nearly two months, the Fine scandal has receded into the background, enabling head coach Jim Boeheim and his players to focus solely on hoops. “I’m only worried about one thing, this team,” he said Jan. 1 after the DePaul game when asked about the Fine situation. “I’m really not going to talk about anything. Everything will be played out. … Everything else will work its way out.” They will go ahead and play the rest of the Big East season but they might as well hand the Orange the regular-season crown right now. Their most intriguing tests could be a pair of games with UConn Feb. 11 and Feb. 25. Meantime, Syracuse is 5-0 in the league while traditional powers Pittsburgh (0-4), Villanova (1-4) and Louisville (1-3) are a combined 2-11. The real surprise is that No. 24 Seton Hall is 4-1 and Notre Dame is 3-1. “We’ve all seen each year something unique in the league,” Villanova coach Jay Wright said. “Last year it was 11 teams [in the NCAAs]. EVerybody was like, ‘Wow, can you believe this?’ Now, the league’s kind of turned upside down and we’re saying, ‘Can you believe that?’ I think the one thing we all know about the Big East is you never know what’s going to happen.” Indeed, traditional bottom-feeders like Seton Hall and Rutgers (2-2 with wins over UConn and Florida) are beginning to make waves while traditional powers have fallen off. “Other than Syracuse just about anybody can beat anybody on a given night,” Huggins said. The Orange are so deep that Dion Waiters comes off the bench and he could win both Big East Sixth Man and Big East Player of the Year honors. Despite coming off the bench in every single game, he went for 20 against Villanova and is second to Kris Joseph on the Orange in scoring (12.9 ppg). “He’s playing well, he’s playing the most minutes of any guard and that should be all that’s important,” Boeheim said. “Somebody’s going to play the most minutes and he’s playing the most minutes and he’s had a great start to the year.” Wright is most impressed that all the Syracuse players seem to have bought in even though there’s such a huge collection of talent with Waiters, Brandon Triche and Scoop Jardine in the backcourt, Joseph on the wing and a slimmed-down and improved Fab Melo down low. “Guys are just willing to wait their turn in terms of their position in the program and also in terms of each game a different guy steps up,” Wright said. “Their depth is the best its ever been and their unselfishness is the best its ever been.” Wright even compared Boeheim to the lead singer in a 50-year-old rock ‘n’ roll band. “I think Jim is the Mick Jagger of college basketball,” Wright said. “He gets cooler as he gets older.” Now, with the Fine mess seemingly in the rearview, Boeheim and Syracuse are marching on. And nobody, not even the coach, knows where the train will stop. “We have a good team that I think can get better,” Boeheim said. “We’re just at the beginning of the conference season. We’re not ready to make any judgments about this team by a long shot. “We’ve got a long ways to go.”