A year ago at this time, Louisville coach Rick Pitino said he told Seton Hall coach Kevin Willard it would take “four or five years” to turn things around from the situation he inherited from former coach Bobby Gonzalez. Relating a conversation he had with Willard in December 2010, Pitino told SNY.tv: “You better put your blueprint together and say what you’re building is not going to come to fruition until four or five years from now and you’ve got to be ready to take it.” Fast forward a year and Willard is way ahead of Pitino’s timetable. The Pirates are 13-2 overall and are coming off their first victory over UConn since March 2001. If they can take care of business in Saturday’s road game at Providence, the Pirates should be a Top 25 team by Monday. “It means a great deal to me personally, but nothing surprises me when it comes to Kevin Willard because he’s one of the most brilliant young men I’ve had the good fortune to work with,” Pitino said Thursday on the Big East conference call. “He has a tireless work ethic.” Pitino pointed out that Willard forfeited his senior year of college to serve as a GA with the Boston Celtics. “He started a lot different than most people,” Pitino said. When Willard turned to Pitino for career advice two years ago, Pitino first advised him not to leave Iona for Seton Hall because the challenges were just too daunting. “Actually, I wanted Kevin just to stay put,” Pitino said a year ago. “When Kevin first approached me on it, I said to Kevin, ‘I’d rather not make that call. I’d rather you stay put. I think you have a great team at Iona and I’d rather you stay put and wait.’ My first conversation with him was discouraging.” 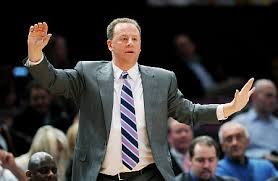 Over the past year, Gonzalez has fired shots at Willard for failing to take the team to the NCAA Tournament, and Pitino, defending Willard, then fired back, calling him “bitter, silly and adolescent.” Last year, Gonzalez told ESPNewYork.com: “If I was back this year we would have won over 20 games and we would’ve went back to the NCAA [tournament]. To have a record like that with the talent that I left them is unacceptable.” Of course, Gonzo never took Seton Hall to the NCAA Tournament, but don’t let the facts get in the way of a good line. Still, in Gonzo’s defense, he did recruit three of the key players on the current Seton Hall team — seniors Herb Pope and Jordan Theodore and junior Fuquan Edwin. But as Pitino pointed out, Willard’s time in South Orange has not been without issue. “He’s building it the right away in difficult times,” Pitino said. “He has one player get shot [Jeremy Hazell] and another player loses his life and is brought back to life [Pope].” Willard was criticized for his own recruiting efforts, but in fact some of his players are now becoming valuable contributors. Sophomore forward Patrik Auda is averaging 8.3 points and 4.7 rebounds. Freshman shooting guard Aaron Cosby went 4-of-7 from deep for 12 points in the UConn game and is averaging 8.1 points on the season. “One thing that Jordan has come to realize is that when he finds ‘AC’ early’ and gets him going, he gets a lot of confidence,” Willard said. “When we were recruiting Aaron, we were recruiting him as a combo guard but as he’s developed he’s really turned himself into a heck of a shooter. He really complements that first group really well….I think Patrik and AC fit in and play defense and really complement those guys well.” At 13-2, Seton Hall now gets Providence on the road before returning home to face DePaul. Both are winnable and the Pirates could be 15-2 or 14-3 before heading to USF Jan. 13. “I think we’ll all very, very proud of Kev and very happy for him,” Pitino said of Willard, “because he’s getting his just rewards.” FREE THROWS A big Giants fan, Willard met Shaun O’Hara on Wednesday following Victor Cruz’s appearance in the Seton Hall locker room Tuesday. “I met Shaun O’Hara yesterday so I’m on a Giants roll,” he joked…Asked by SNY about Andre Drummond’s ‘Who’s Herb Pope?’ comment, Willard took the high road. “Andre Drummond is a terrific kid. He’s probably a better person than he is a basketball player….I’m just glad he’s not going to be in the league for three or four years.”