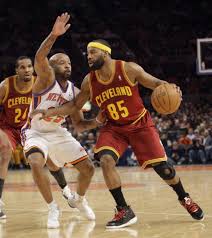 Baron Davis cleared waivers Friday night but it remains unclear if the Knicks have serious interest in the former Cleveland Cavaliers point guard. Davis was amnestied Wednesday and has two years and $28 million remaining on his contract. Davis would reportedly like to go to either the Knicks or the Los Angeles Lakers, but he is suffering from bulging discs in his back. His agent, Todd Ramasar, says he will be sidelined 8-10 weeks. Another option for bench depth for the Knicks is shooting guard Michael Redd, but head coach Mike D’Antoni said he wasn’t necessarily a priority. “It’s not really a position we’re looking for,” D’Antoni said Friday of Redd. “He’s more of a two and we have a bunch of guys who can play the two. We’d like to have a little bit bigger guy that can go back to the four some.” Forward James Posey, who won titles in Miami (2005) and Boston (2008), and forward Troy Murphy, a New Jersey native, are other possibilities for the Knicks, who have only the $2.5 million “room” exception available. Murphy, who worked out at the Lakers facility this week, has averaged double-figures in scoring seven times in his career and has had five years of double-doubles.

Four Standing Out for Muhammad