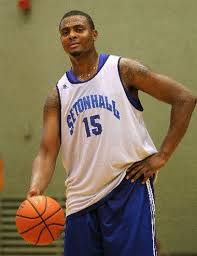 An NCAA Tournament bracket prediction in December means about as much as a Presidential election poll a year out. Nonetheless, Seton Hall fans should rejoice at this holiday team, for both Jerry Palm and Joe Lunardi have the Pirates among their last four teams into the 2012 Big Dance. “It’s December, nobody’s even played a conference game yet,” Palm told SNY.tv by phone Thursday night. “There’s a long way to go. I wouldn’t get too excited about a December bracket. “[But] what the heck. You’re 8-1, get fired up now.” The Pirates, who last appeared in the NCAAs in 2006, are 8-1 and riding a five-game winning streak. They are No. 9 in the RPI and own wins over VCU and St. Joe’s, with a loss to Northwestern. “Those would be wins against the field for Seton Hall,” Palm said. “But we’ll see what those turn out to be.” Palm has seven Big East teams in the Big Dance, with No. 1 overall Syracuse as a No. 1 seed. UConn, Marquette, Pitt, Georgetown, Louisville are also in Palm’s bracket. By contrast, Palm has nine Big Ten teams in. “I think the Big East is down some now,” Palm said. ” I think the middle isn’t as strong.” COACH SAYS MOBLEY WILL MAKE BIG IMPACT

Another good piece of news for Seton Hall is that they got 6-8 freshman forward Brandon Mobley back this week, and he will be eligible for Sunday’s game against Mercer. Mobley has been out with torn labrum in his shoulder, but his high school coach believes fans will be impressed with his shooting ability. “He can really shoot it,” Bryan Clayton of St. John’s Northwest Military Academy (Wisc.) told SNY.tv. “He’s a big time shooter.” Still, Clayton said it will take some time for Mobley to get his groove. “I think he’s going to take some time to get used to the speed of the game because he hasn’t really been doing anything with his shoulder,” he said. “But the kid is 6-8 and can flat out fill it up.” In his lone year at St. John’s Military, Mobley averaged 21 and 11 while shooting 45 percent from beyond the arc. “He’s definitely got college range, if not NBA range for the way he shoots the ball,” Clayton said. “He’s a combo forward. He’s still developing with his back to the basket, but he’s a big-time scorer from the outside.”