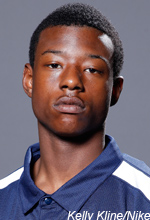 As first reported last week by FiveStarBasketball.com, South Kent’s Chris Thomas, the Rivals No. 1 shooting guard in the Class of 2013, has a top three of Xavier, Kentucky and Florida. In an extensive interview Friday with SNY.tv, Thomas’s grandmother, Latonia Smith, expanded upon those three schools. “With Chris, he really likes Xavier because the assistant coach, Rasheen Davis,” Smith told SNY.tv. “He really likes the way Rasheen communicates with him and encourages him and is always in his corner, so he really likes that about him.” As for Kentucky, she said: “He likes Kentucky because Kentucky is Kentucky. They have been in touch with him. He really likes their program as far as the basketball, what he sees on the floor. How the guards run the court and the basketball program as a whole.” The third option is Florida. “I think the reason why he’s really liking Florida right now is because he’s seen the team play, he likes the way that they run the floor,” Smith said. “He also likes the fact that they’re one of the schools that took the time to send all the recruiting information to his school instead of his house when he’s in Connecticut. So he gets to read that personally, and the other schools, they’re still sending it to the house. So we have to wait until he comes home to show him all that.” Yet Smith added that it’s still early in Thomas’s process. “These are just top his three,” she said. “There’s been interest from Seton Hall, Missouri, Nebraska and Iowa State. Iowa State actually just recently offered him a full scholarship.” Smith said Seton Hall has also offered. Smith said Thomas will likely make a decision sometime next spring or summer. “He’ll probably decide after he graduates in May,” she said. “He’s going to be a fifth-year senior so he’s graduating in May and then he’ll continue in South Kent to get his D-1 credits.” As detailed in this extensive feature on Thomas from September, he has attended multiple high schools and sometimes gets a bad rap as a result. But Smith said “what people don’t really understand is that the circumstances were not of his making. “The first school when he was in Denver at Montbello High School, yeah he messed up big time that whole year,” she said. But at Princeton (Md.) Day Academy, Smith said Thomas was living with the head coach, but the coach had a “heart attack” and “double pneumonia,” and “there was no way that Chris could just stay there by himself for four months.” Thomas then shifted to play for Westwind (Az.) Prep, but the head of the program, Gary Trousdale, was forced to leave when his own father was diagnosed with Lou Gehrig’s disease. Trousdale has since set up a new program at La Jolla Prep, which currently has four Division 1 signees and played at the recent National Prep Showcase in New Haven, Conn. “He had a two-year commitment [to Westwind], but at the end of the year the coaching staff up and moved to La Jolla, and they wanted Chris to go with them,” Smith said. “The coach will probably do real well with that school, but that’s not something that we could have taken a chance of. “So we had to do something that’s established, something that we knew was legitimate that we could believe in. And so that’s why he ended up at South Kent.” Thomas now plays alongside Providence signee Ricky Ledo, and Smith believes South Kent head coach Kelvin Jefferson “can help him get back on track.”

Scoop Must Accept New Role For 'Cuse to Succeed