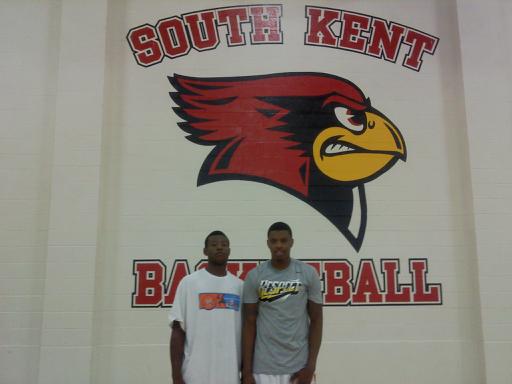 SOUTH KENT, Conn. — Ricky Ledo and Chris Thomas share a lot in common. Both are potential pros who are still trying to get a grasp on maturity issues. Both have had difficult family lives and are being raised by grandparents. And both have landed at the South Kent school with a chance to make — or break — their futures together. “I’m hoping it clicks and they make it to college and go on to make a lot of money one day,” South Kent coach Kelvin Jefferson told SNY.tv Wednesday after an open gym at the school. LEDO TAKES AIM AT CRITICS The 6-foot-6, 180-pound Ledo won’t admit it, but he’s clearly bothered by all the things he’s read about himself on the Internet in recent weeks. Negative, hurtful things directed at a kid.

One report — which lacked a single quote from Ledo himself — even went so far as to suggest the best thing for Providence would be if Ledo never even stepped foot on campus. “I wouldn’t say it really hurt me,” Ledo, who earlier this month committed to Providence for the second time, told SNY.tv. “All those people that speak on me, they don’t know me and they never have met me to judge me or my character. “Maybe sometimes if I’m upset with a call or something there’s body language. I have to work on that. I agree. But otherwise, a bad person and all that, they don’t know me so they can’t judge me.” Some have suggested that Ledo, 19, would have been better off leaving his hometown of Providence for college and picking one of his other options — Kentucky, Syracuse, UConn or West Virginia. “That’s just other’s people’s opinions,” Ledo said. “It’s my decision, and I talked it over with my family and it’s my choice. It’s not anyone else’s decision or anything like that.” Ledo first committed last Christmas to then-Friars coach Keno Davis. But during the ensuing weeks, he endured some difficult family times related to his father, Ricardo Carrasco, and opted to both decommit from Providence and switch schools, leaving South Kent for Notre Dame Prep. This fall, he again switched course, committing to Providence Sept. 5 even after Notre Dame Prep coach Ryan Hurd wanted him to wait. “I certainly wish Ricky the best and hope that, at some point,” Hurd told SNY.tv, “this journey he’s been on is going to end up with him on a college campus someday.” If you count South Kent twice, Ledo is now at his fifth high school. “I’m glad to be back, happy to have a second go-round,” Ledo said of South Kent. As for the Providence commitment, he feels a strong bond with first-year head coach Ed Cooley and associate head coach Andre LaFleur, and feels they can prepare him for the next level. “Coach LaFleur, he was at UConn for 10 years,” Ledo said. “He worked with dozens of pros. He worked with my position, so it’s not like I’m not going somewhere with no experience of putting people in the NBA. And as far as Coach Cooley, he’s a good family-oriented guy. Like already, he wants people to stay at his house. It’s just a family.” While some question whether Ledo will get into trouble at Providence, Ledo says his support system there, including his grandparents, Ada and Julio Carrasco, will help him grow and develop. “I can go right down the street to my house to talk to my grandmother, and I’m close with my grandparents,” he said. “That’s a big reason I wanted them to see me play. My grandparents mean everything to me.” “I think Providence is a great move for Ricky,” Jefferson added. “He’s got a great support system. He’s got a great family, aunts, grandparents, people that love him. “One thing I’ve learned is, kids have success when they have people in their lives that aren’t afraid to say no to them. And he’s got people in his life that will say, ‘No, Ricky, you shouldn’t do this. You should do this.’ And his support system is there.” Jefferson, now in his second stint coaching Ledo, actually said he believes that Ledo fits better with Cooley’s program than he might have under Davis, the former coach. “I was a fan of Coach Cooley’s at Boston College, Fairfield, what he’s done there,” Jefferson said. “Being able to relate to his players. Coach LaFleur, all those guys. I think they’re going to do a great job with the kid, and I think that’s a perfect spot for him. I truly believe that.” Ledo has yet to take the SAT and his academic situation remains somewhat murky upon his exit from Notre Dame Prep. Still, Jefferson said he’s confident Ledo will qualify to play college ball for the 2012-13 season. “Honestly, I wouldn’t have taken him if I didn’t think he had a chance to qualify,” Jefferson said. THOMAS’S JOURNEY BRINGS HIM EAST

Like Ledo, the 6-foot-5, 190-pound Thomas is well traveled and owns a complex personal history. A Denver native, Thomas began his career at Denver Montbello before transferring to Bowie (Md.) Princeton Day. In his first season there, he helped lead his team to a 31-6 record, losing in the state title game. He then moved on to Westwind (Ariz.) Prep. He was there for the second semester last season but never played because he arrived late. Now the Rivals No. 1 small forward in the Class of 2013 has come East again to South Kent. “What made me come back to the East Coast is I heard Coach Jefferson was a good guy, and I heard that he could help me, he could help me a lot,” Thomas said. “So I talked to him on the phone. He said all the right things and it made me come here.” Still, Thomas admits he’s homesick. “Yeah, I miss home a lot,” he said. “I miss home a lot. Sometimes I just want to go back, I just want to stop. But it makes me even work harder. Sometimes I think about back home, and I think what I could do here and it could make me do a lot.” New York recruiting expert Tom Konchalski said Thomas was the best player in the gym Wednesday, when his team won every game of pickup and beat Ledo’s team several times, causing Ledo to punch the ball on one occasion and slam it to the ground on another. “Chris can be as good as he wants to be,” Jefferson said. “Chris can score on all three levels. Chris is going to get bigger and stronger and the nice thing about him is, just on top of scoring, Chris can play the point. You can move him over to the one and let him run the show. He’s a very unselfish player and he’s a kid that I think would do anything I asked him to do in order to win.” He added: “He’s gotta raise his basketball IQ. He’s gotta be a better defender and we gotta spend a lot more time in the weight room but the sky is the limit for the kid. “We’ve had some good players and if he continues to develop, he can be one of the best players that ever came through the gym here.” Thomas said he holds offers from Kansas, N.C. State, Xavier, Missouri and Florida, among others. Jefferson said Arizona, Texas A&M and Seton Hall have also called. “I’m wide open,” Thomas said. “I’m really not looking for schools right now. I’m trying to get my grades, and then I’m trying to get my game back.” Like Ledo, Thomas, who turns 18 in November, is also battling some maturity issues. While playing for the Colorado Hawks AAU outfit this summer, he was thrown out of at least one game, a game that happened to have John Calipari, Sean Miller, Bill Self, Bob Huggins and Jim Calhoun all in attendance. “I really want him to really take this time to concentrate on his academics and work hard,” Jefferson said. “He’s getting with his tutors. He’s working his tail off. He wants to be a good student and that’s what he’s concentrating on doing right now.” JOINING FORCES ON THE COURT Ledo and Thomas appear to enjoy one another’s company and seem to be fast friends. “Ricky’s a good guy, he’s a funny guy,” Thomas said. “He gets me better every day. That’s why I guard him every day in practice.” Said Ledo: “It’s fun. He’s a good player. He’s exciting. He’s a good teammate.” Yet both are used to being the alpha male on their respective teams, and now they will have to merge their talents and play off one another if South Kent is going to have success this season in the NEPSAC while battling Brewster, Bridgton, Winchendon and others. “They’re two guys who are used to being the primary option of their teams, and are used to having a lot of shots,” Konchalski said. “Chris Thomas is a guy who has a more complete game than Ricky. Now he can’t shoot the ball from the perimeter the way Ricky Ledo can do. But he’s a born scorer. He scores like we breathe. “He can get to the basket, he gets into the lane on balance and finishes around the basket. But he’s also a terrific passer, both on penetration and just seeing people. Sees the floor well. He could play on the ball and create offense for other people. “Whereas Ricky Ledo needs shots. Ricky Ledo has inter-gallactic range. He’s about as good of a deep shooter as you’re going to find. But he’s got to learn to play with four other guys. The first 10 minutes [Wednesday], he passed the ball more than I think I’ve ever seen him pass in all the collective minutes I’ve watched him play in the past. But he looks for his shot primarily. He’s got to learn to score in other ways.” While playing with the Albany City Rocks this summer at the Peach Jam, Ledo’s team — which included Jamesville-DeWitt big man DaJuan Coleman — didn’t win a single game. Ledo is aware of the criticism and said it’s something he wants to work on. “I say I’m an under-rated passer,” he said. “I’m never a selfish player. So as far as getting my teammates involved, I’m always willing to get my teammates involved. I just want to win. “I want to win. It’s not like I’d rather have mine and lose. I want to win. That’s why I’m going to Providence, to win.” Jefferson is confident the two stars can merge their talents, and more importantly, continue to grow and develop as young men. But he understands there are inherent risks to the marriage. “I’m keeping my fingers crossed but I’m hoping they’ll be able to coexist together,” Jefferson said. “I’m optimistic they will be able to, but it’s still early.”