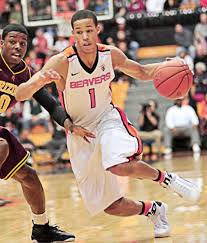 EAST RUTHERFORD, N.J. — Jared Cunningham committed to Arizona State as a sophomore out of San Leandro (Calif.) High School. But Cunningham said the school opted to go in a different direction during signing period of his senior year, leaving him free and clear to go somewhere else. “I think they got somebody at my position,” Cunningham told SNY.tv Monday at the Izod Center. “I really never got the answer really what happened. We just decided to part ways.” Arizona State’s loss turned out to be Oregon State’s gain. “Oregon State was the right fit for me so I went with them,” he said. A source close to the Arizona State staff told SNY.tv, “I wish him well. He’s a great player and kid.” After averaging 6.2 points as a frosh, the 6-foot-4 Cunningham increased his production to 14.2 points as a sophomore. Now, through the first four games of his junior year, he was averaging 26 points, 5.3 rebounds and 1.8 assists, including a 35-point outing against Hofstra. After going off for a career-high 37 points in Saturday’s 100-95 overtime win against Texas in the Legends Classic, Cunningham was held to nine points on 3 of 9 shooting in a 64-62 loss to Vanderbilt in the championship game. He was named to the All-Tournament team. “He’s a really quick player,” said Vandy’s Jeffery Taylor, who covered Cunningham for much of the game. “Very nifty with the ball, great ball-handler and he has knack for getting to the basket and getting behind people’s heads, so it was a tough assignment.” Cunningham also made seven steals that led to 22 Vandy turnovers. “He’s a pretty disruptive player,” Taylor said. “He’s quick and flies around on defense. He’s always playing passing lanes so he’s a good player.” OSU coach Craig Robinson said several NBA teams — the Trail Blazers, Celtics and Pistons — have attended practice to watch Cunningham. “I think he can play both [guard spots],” Robinson said. “We don’t play him at the point because we need him to score more but when Ahmad [Starks] takes a blow, he moves over to the point and last I checked we’re still scoring when he’s in there at the point. “I think he’s going to have a nice career and I think that he’s the type of guy that people are going to want at the next level. He’s already a professional. He gets his work done, he comes in, he works out, he stays out of trouble. He’s got great family. He’s just the kind of guy you want. “And he’s one of these guys who can defend, so I always say the good teams will be the ones who will take a look at him to come guard their best player in practice every day.” Cunningham concedes he’s thinking about the NBA “down the road,” but has other priorities first. “Eventually,” he said. “Right now I’m focused on Oregon State and trying to get some wins for this program and just help the team get to the [NCAA] Tournament at the end of the year.”